After Elizabeth I died in 1603, her reign acquired a legendary quality. Both her immediate Stuart successors, James I and Charles I favoured monarchical government by divine right, which conflicted with the assertive parliamentary government that Elizabeth managed throughout her reign. The Stuarts also inflamed religious tensions in the British Isles as they attempted to impose Church of England forms of worship on Presbyterian Scotland while appearing to tolerate Roman Catholicism at Court. By the time these political and religious tensions precipitated the English Civil Wars in the 1640s, the reign of Elizabeth I appeared to be a Golden Age of prosperity and harmony. 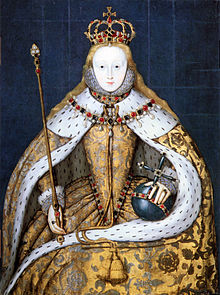 Since Elizabeth I was preceded by her sister Mary I, who was famous for ordering the burning of Protestants who refused to conform to her Catholic religious settlement and succeeded by the misrule of the Stuarts, the religious conflict of her own reign largely disappeared from the popular imagination. In Heretic Queen: Queen Elizabeth I and the Wars of Religion, biographer and screenwriter Susan Ronald invites readers to step away from the Tudor mythology that has inspired popular histories, novels and films and immerse themselves in Elizabeth’s England, where religion infused every aspect of daily life and public disagreement with the Queen’s conception of the Church of England could cost Roman Catholics or dissenting Puritans their lives. Ronald dramatically retells Elizabeth I’s reign through the lens of her role in the sixteenth century Wars of Religion, revealing the violence and conflict that accompanied the seemingly peaceful Elizabethan religious settlement.

In contrast with her contemporaries in continental Europe, such as Catherine de Medici, Regent of France and King Philip II of Spain, and her siblings, Edward VI and Mary I, Elizabeth had an unusually tolerant attitude to the religious conflict that followed the Protestant Reformation. “There is only one Christ, Jesus, one faith,” the Queen once proclaimed, “All else is a dispute over trifles.” In this spirit, Elizabeth attempted to introduce a state religion that would satisfy the greatest number of her subjects, with a Protestant Book of Common Prayer and the familiar rituals of the old medieval Catholic Church. 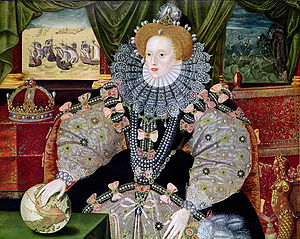 Portrait of Elizabeth I celebrating her victory over the Spanish Armada

While Ronald argues Elizabeth I’s approach to religion ultimately helped make England a great world power, the Elizabethan settlement was reviled by both Roman Catholics and Protestant Puritans who favoured their own religious traditions. Since Elizabeth ruled as Supreme Governor of the Church of England, public adherence to the state church was synonomous with obedience to the monarch.

To defend her church and her authority, Elizabeth executed or drove into exile Roman Catholic nobility in the North of England, who had enjoyed near autonomous authority over the turbulent borderlands between England and Scotland. The Queen also accepted Protestant exiles from continental Europe who were fleeing French or Spanish Catholic religious authority. These displacements of whole families or communities changed England, filling the cities of the south with Huguenot artisans and finally subordinating the North to the monarch’s full authority.

Elizabeth’s role in the sixteenth century Wars of Religion is well told by Ronald, but her interpretation of some of the Queen of England’s fellow rulers does not incorporate the full range of recent scholarship concerning their own political and religious activities. Ronald is correct to place Mary, Queen of Scots in her proper French context. As the widow of King Francois II, her political interests were intertwined with those the French monarchy. The question of whether Mary acquiesced to the murder of her second husband, Henry Stuart, Lord Darnley, however, is not discussed at length. Ronald states that Mary argued the incriminating “Casket Letters” were a forgery then concludes, “Of course she would, wouldn’t she?”

The scholarly and popular debate regarding the authenticity of the Casket letters should have been discussed in greater depth as these documents strongly influenced Elizabeth’s treatment of her cousin and fellow sovereign. Ronald also uncritically accepts the traditional view that Catherine de Medici ordered the massacre of thousands of Huguenots on St. Bartholomew’s Day in 1572. Catherine’s recent biographers have separated the removal of Huguenot leaders from the wider massacre, suggesting that popular religious violence far exceeded the expectations or political goals of the Dowager Queen and her sons. Just as Elizabeth I’s reign achieved a popular mythology as a golden age, Mary, Queen of Scots and Catherine de Medici also inspired received wisdom that has recently been debated by historians.

Heretic Queen: Queen Elizabeth I and the Wars of Religion vividly retells Elizabeth I’s role in the sixteenth century European Wars of Religion, demonstrating that a violent struggle accompanied the Queen’s religious compromise. While Elizabeth would be glorified after her death, she had to fight for her legitimacy as Queen and her religious settlement in her own lifetime. Ending the Protestant Reformation in England involved as much turmoil and displacement as the beginning of the religious upheaval introduced by Elizabeth’s father, King Henry VIII.

One thought on “The Tudor Book Reviews 9: Heretic Queen: Queen Elizabeth I and the Wars of Religion by Susan Ronald”