On May 20, 1802, First Consul Napoleon Bonaparte reinstated slavery in the French Empire. Following the French Revolution, the National Convention abolished slavery in all French territories in 1794. When Napoleon and his fellow consuls came to power in 1799, they swore to uphold revolutionary ideals including abolitionism, stating in a proclamation to the people of Sainte-Domingue (Modern Haiti and the Dominican Republic), “The Consuls declare that the sacred principles of the liberty and equality of the black peoples will never undergo any threat or modification among you . . .if there are any who maintain relations with the enemy powers, remember brave blacks, that the French people alone recognize your freedom and the equality of your rights.”

Just three years later, following the 1802 Treaty of Amiens between France and Great Britain, Napoleon abruptly changed his public stance regarding abolitionism. He justified the reinstatement of slavery by stating, “How could I grant freedom to Africans, to utterly uncivilized men who did not even know what a colony was, what France was?” Napoleon’s decision to reverse the French Revolutionary ideals of liberty, equality and fraternity was undoubtedly influenced by his desire to revive the lucrative Caribbean sugar trade and solidify his political authority in addition to his own prejudices.

Napoleon’s contemporaries, however, blamed the influence of his wife, Josephine. Like Napoleon, who was raised on the island of Corsica, Josephine grew up outside mainstream French society as the daughter of slave owning sugar planters on the Caribbean island of Martinique. She recognized that Napoleon sought the support of wealthy planters on the island, which he had recently regained from the British.

Josephine wrote to her mother, Rose-Claire des Vergers de Sannois, in 1803, “Bonaparte is very attached to Martinique and is counting on the support of planters of that colony; he will use all means possible to preserve their position.” While Martinique and Guadeloupe remained French possessions, Saint-Domingue declared independence as the Republic of Haiti in 1804, preserving the freedom of the previously enslaved population of this island. As the most prominent representative of Martinique’s planter aristocracy in French society, Josephine was scrutinized for her influence on Napoleon’s policies toward the French Caribbean. 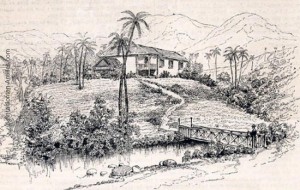 Josephine was born Marie Josèphe Rose Tascher de La Pagerie in Trois-Ilets, Martinique in 1763. She was known as Rose until her marriage to Napoleon in 1796. Her mother, Rose-Claire, was the daughter of an established planter family that had owned land in Martinique for generations. In contrast, her father Joseph Gaspard Tascher de La Pagerie, was an impecunious member of the French nobility who traveled to the island to make his fortune.

Martinique had a reputation as the jewel of the French Caribbean. In 1732, Captain Robert Durand of the slave ship, The Diligent, wrote, “Martinique is the American Island that carries the most beautiful commerce as judged by the large number of vessels that always abound here and by the fertility of its land, which produces beautiful sugar, cotton, coffee etc. This island furnishes all the other windward isles of America and gives them an outlet for all they produce.” 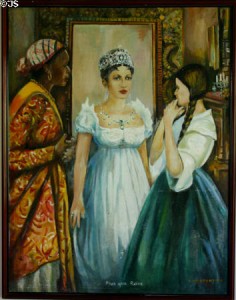 Artist's depiction of the young Rose hearing a fortune teller's prediction that she would be "greater than a queen." Photo credit: Jim Steinhart

Despite the island’s overall prosperity, Josephine’s parents struggled to turn a profit on their sugar plantation. All the buildings on their estate except for the stone sugar refinery were destroyed by a hurricane in 1766 and Joseph’s lack of business experience slowed the family’s efforts to rebuild. Despite her parents’ precarious finances, Josephine and her two younger sisters, Catherine and Manette had a happy childhood. As Empress, Josephine recalled, “I ran, I jumped, I danced, from morning to night; no one restrained the wild movements of my childhood.”

Before emigrating to Martinique, Joseph had been a page at the court of King Louis XV and Josephine was eager to see France. She had her chance in 1779 when her Aunt Desiree requested that Joseph send one of his daughters to France to become the wife of Alexandre de Beauharnais, the son of her lover, Francois, Vicomte de Beauharnais. Fifteen year old Josephine fell in love with both Parisian society and her betrothed.

According to Josephine’s biographer, Andrea Stuart, “Alexandre was exactly the  sort of young man that [Josephine] and her school friends had fantasized about back at the convent. He was a type that was regarded as exceptionally attractive during the period. Not particularly tall, he was nonetheless  “handsomely built” with wide-set, intense blue eyes, a long curved nose and full lips. His hair, meticulously coiffed and powdered, was pulled back into a neat bow at the nape. In an age when the most romantic of all occupations was the army, he was a soldier. His natural assets were heightened by his captain’s uniform: white with silver grey buttons and facings. Most impressive of all was his manner. At nineteen, Alexandre was already an impressively worldly young man, supremely confident and supernaturally elegant . . .”

Despite Josephine’s instant attraction to Alexandre, her marriage was unhappy. Alexandre was disappointed that his bride’s family was not wealthy, as he had been led to believe. He was also critical of Josephine’s limited education and lack of experience with fashionable society. The birth of their son Eugene in 1781 and daughter Hortense in 1783 did not improve the couple’s relationship. After visiting Martinique to ascertain the extent of her family’s assets, Alexandre obtained a legal separation from his wife in 1785. Following a brief career as a general and political figure during the French Revolution, Alexandre was guillotined in 1794, at the height of the Terror, leaving Josephine a widow. 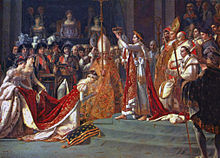 Napoleon crowning Josephine as his Empress in 1804

By the time Josephine met Napoleon in 1795, she was no longer an outsider to French society. Her connections with France’s political elite contributed to Napoleon’s rise to power as French consul. Modern historians have discovered little evidence that Josephine actively encouraged Napoleon reinstate slavery but the fact that her mother still presided over a Martinique sugar plantation in the 1790s fuelled the popular perception that she dictated the consul’s policies in the French Caribbean. Napoleon became Emperor in 1804 and crowned Josephine his Empress at his coronation but the couple divorced in 1810 because she did not have any more children. Napoleon lost his throne in 1815 but slavery would not re-abolished in the French Caribbean until 1848.

The Rose of Martinique: A Life of Napoleon’s Josephineby Andrea Stuart

The Diligent: A Voyage Through the Worlds Of The Slave Tradeby Robert Harms

A Colony of Citizens: Revolution and Slave Emancipation in the French Caribbean, 1787-1804by Laurent Dubois

Next weekend: The Royal Rumours Surrounding the Wreck of the Ten Sail

One thought on “Royalty and the Atlantic World 2: Napoleon, Josephine and the French Caribbean”