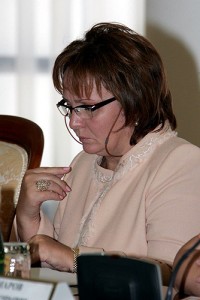 On Thursday June 6, Russian President Vladimir Putin and his wife Lyudmila Putina announced on state television that are getting a divorce after nearly thirty years of marriage. Putin described the divorce as “our joint decision” and explaining that the couple had lived separate lives for some time. The couple were married in 1983 and have two adult daughters, Mariya and Ekaterina.”

The Putin divorce is in keeping with current Russian social trends. Russia has the 15th highest female divorce rate and 28th highest male divorce rate in the world and the Russian Orthodox Church permits divorce under certain circumstances. The Russian people, however, are not accustomed to the public breakdown of the marriages of their leaders.

President Putin will be the first Russian leader to divorce while in office since Czar Peter the Great sent his first wife, Evdokia Lopukhina to a convent in 1698. Like the Putins, Peter and Evdokia had lived separate lives for a long time before the official end of their marriage. Unlike this week’s Russian divorce announcement however, Peter the Great’s divorce was not a mutual decision and transformed his first wife from an admirer to a potential political opponent. 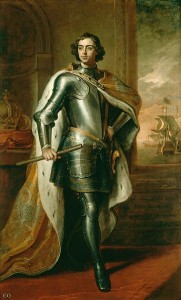 Peter the Great at the time his first marriage ended in 1698.

Czar Peter I of Russia married Evdokia Feodorovna Lopukhina on January 27, 1689. At the time of the marriage, seventeen year old Peter nominally ruled Russia as co-ruler with his elder half brother, Ivan V. Real power, however, was exercised by Peter’s half sister – and Ivan’s full sister – Sophia, who ruled as regent on account of Peter’s youth and Ivan’s intellectual and physical disabilities.

By 1689, Ivan’s wife, Praskovia was expecting her first child and it was possible that Sophia would exclude Peter from the succession and continue to rule as regent for Ivan and his child. This arrangement would ensure that the relatives of Sophia and Ivan’s late mother, the Miloslavskys would continue to hold key government positions while the family of Peter’s mother, the Naryshkins, would be entirely excluded from power.

Peter’s mother, the Dowager Czarina Natalya Naryshkina decided that the most effective challenge to Sophia’s continued rule was a suitable marriage for her son. As a married man, Peter would be perceived as an adult who could rule without a regent. Any children of Peter’s marriage would be alternate successors to Ivan’s children. The teenaged Peter, however, was more interested in shipbuilding and spending time with his friends in Moscow’s foreign quarter than choosing a bride. Natalya therefore made the final selection. She chose Evdokia Lopukhina, the daughter of Feodor Abramovich Lopukhin and Ustinia Bogdanovna Rtishcheva, members of the gentry with strong ties to the Naryshkin faction at court. There are no portraits of Evdokia painted in her youth but an observer described her as of “average beauty but good understanding.” 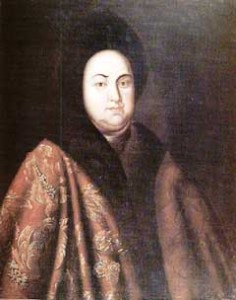 The marriage achieved its political ends. By the fall of 1689, Peter the Great had seized power and sent his sister Sophia to Moscow’s Novodevichy Convent. Peter retained Ivan as his co-ruler and remained on good terms with his brother, sister-in-law and their daughters but power was exercised by Natalya and the Naryshkin faction while the newly married Czar pursued his own interests.

On a personal level, however, the marriage of the restless, reforming Peter and the pious conventional Evodokia was a disaster. Within a few weeks of the wedding, Peter left Evdokia with his mother in Moscow to participate in shipbuilding on Lake Pleschev, pursuing his dream of equipping Russia with a navy. During his months in Pereslavl, Peter wrote often to his mother but did not send a single letter to Evdokia. 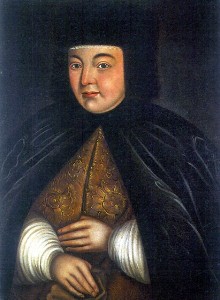 Despite Peter’s silence, Evdokia wrote to Peter on his shipbuilding expedition, hoping he would return to her. One surviving letter states, “I salute my Lord, the Tsar Peter Alexeevich. May you be safe, my light, for many years. We beg your mercy. Come home to us, O Lord, without delay. I, thanks to your mother’s kindness, am safe and well. Your little wife, Dunka, bows low before you.”

Evdokia’s submissive expressions of affection irritated Peter because she also disapproved of his interests. The new Czarina had been raised to regard foreigners as heretics and viewed Peter’s enthusiasm for Western culture and technology with alarm. In contrast to Peter’s sister-in-law, Praskovia, who assumed Western dress and hired foreign tutors for her daughters according to the Czar’s wishes, Evdokia remained attached to Muscovite ways. The birth of two sons, Alexei in 1690 and Alexander in 1691 did not bring the couple closer together. When Alexander died in infancy, Peter was so estranged from Evdokia that he did not attend the funeral. 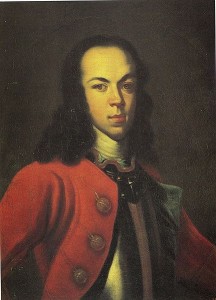 Tsarevich Alexei, the only surviving son of Peter and Evdokia

When the twenty-six year old Peter embarked on his eighteen month tour of Europe in 1697, he ordered senior courtiers and the Patriarch of the Russian Orthodox Church to persuade Evdokia to become a nun. Once the Czarina took the veil, her earthly ties, including marriage would be at an end, leaving Peter free to remarry. Evdokia refused to leave the Kremlin and her surviving son, Alexei.

Upon his return to Russia in 1698, Peter summoned Evdokia and demanded that she release him from their marriage by taking vows. When Evdokia continued to refuse, citing her duties as a wife and mother, Peter seized their eight year old son, and placed him in the custody of his younger sister, Natalya. Evdokia was placed in a postal carriage without attendants and sent to the Pokrovsky convent in Suzdal. There, the twenty-nine year old Czarina’s head was shaved and she was compelled to take vows as the nun Helena. 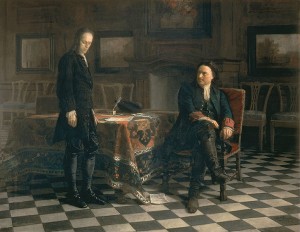 Peter’s marriage to Evdokia ended in 1698 but the Czar’s former wife reemerged later in his reign as a potential political opponent. In 1718, Peter suspected his son Alexei of conspiring against him and had him arrested. Evdokia and Alexei had remained in contact after the divorce and Peter suspected that his former wife was plotting against him as his overthrow would allow her release from the convent. Furthermore, Evdokia had refused to live as a nun in Suzdal. She had dressed as a laywoman, allowed her hair to grow back and taken a lover, Major Stephan Glebov. Evdokia was arrested and brought to Moscow for questioning then exiled to a convent in Ladoga.  Her son Alexei met a far worse fate. The Tsarevich died in prison on July 7, 1718, having been sentenced to death by his father and tortured for alleged conspiracy against the state.

Peter the Great died in 1725 and was succeeded by his second wife as Catherine I. Upon Catherine’s death in 1727, Peter and Evdokia’s grandson, ascended the throne as Peter II. The teenaged Tsar released his grandmother from captivity and she was able to hold court in Moscow at the Novodevichy Convent until her death in 1731. The breakdown of Peter’s marriage to his wife, Evdokia and relationship with his son, Alexei had lasting repercussions for the Russian state. The Russian succession was unstable throughout the eighteenth century until the ascension of Catherine the Great, the wife of another one of Peter the Great’s grandsons, Peter III. There would not be another Russian leader to divorce while in office until President Vladimir Putin in 2013.

Lindsey Hughes, Russia in the Age of Peter the Great
Russell E. Martin, A Bride for the Tsar: Bride Shows and Marriage Politics in Early Modern Russia
Robert K. Massie, Peter the Great: His Life and World
Natalia Pushareva, Women in Russian History: From the Tenth to the Twentieth Century