On the cover of Russell E. Martin’s comprehensive study of Russian royal bride-shows, A Bride for the Tsar: Bride-Shows and Marriage Politics in Early Modern Russia is Grigorii Sedov’s painting, “Tsar Aleksei Mikhailovich selects his bride.” Sedov painted this work in the late nineteenth century when the customs of the sixteenth and seventeenth century Muscovite court, which were largely abolished when Emperor Peter the Great moved the capital to St. Petersburg, inspired Russia’s artists, writers and composers. 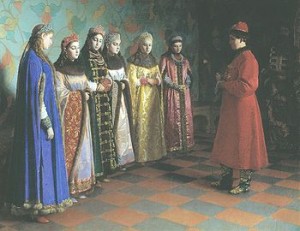 Martin judges Sedov’s painting to be the most accurate representation of the bride show, where every Russian ruler from Ivan the Terrible’s father, Vassily III, to Peter the Great selected a wife from the daughters and sisters of the mid ranking court gentry. The teenaged Tsar Aleksei is shown tentatively holding out a rose to a group of six young women, who are dressed in their finest gowns and jewellery but demurely avoid meeting their sovereign’s eye.

In contrast to modern reality television shows such as The Bachelor, the woman who received the rose would not only gain wealth and fame but her relatives would emerge from comparative obscurity to receive prestigious positions at court. In Sedov’s painting, barely visible behind the young Tsar, is a shadowy nobleman, undoubtedly advising his master to choose a particular lady and her family to elevate with his favour. With the fortunes of so many people dependent on the Tsar’s choice, the potential for intrigue and sabotage was high, making royal bride shows events of immense political significance and personal drama.

Russell E. Martin, a professor of Russian history at Westminster College has done extensive scholarly work about royal bride shows and A Bride for the Tsar includes a wealth of previously unpublished archival sources. His research reveals the roles prominent boyars (nobles) and their wives played in the selection, how the arrival of a new royal bride affected the political and social dynamics of the Russian court, and how matches with foreign princesses fell out of favour in the sixteenth century only to become popular again in Peter the Great’s reign (1682-1725). Martin also describes examples of bride shows at other courts throughout Europe and Asia, theorizing that the Russian bride show had Byzantine antecedents. One of the last foreign marriages before Tsars began choosing local brides was the union of Ivan the Great and Sophia Paleologue, niece of the last Byzantine Emperor.

One of the most fascinating aspects of Martin’s research is how the bride shows reveal aspects of the personalities of the early Tsars of Russia and their wives and demonstrates who were the most influential figures at each ruler’s court. For example, the seven successive wives of Ivan IV “The Terrible” are described as “shadowy figures” by historian Natalia Pushkareva in Women in Russian History but documents relating to the seven successive bride shows that undoubtedly took place in Ivan’s reign reveals the place of their families at the Tsar’s court. The decision of the first Romanov Tsar, Mikhail, to repudiate his first betrothed, even when an investigation revealed she was the victim of a court plot to sabotage her chances of marrying the sovereign, reveals the strong influence of his mother over his decisions.

Martin also presents evidence that challenges conclusions put forth in popular works about Russia’s Tsars. Peter the Great’s biographers, such as Robert K. Massie, have described the marriage of Peter’s parents, Tsar Aleksei and Natalia Naryshkina as a love match that blossomed in the household of her godfather, Artamon Matveyev. The documents relating to the bride show where Aleksei selected Natalia as his second wife reveal that there was another candidate who may have been the Tsar’s first choice. Natalia most likely owed her position to her godfather’s ambition and the sympathy she received as the target of a plot to undermine her reputation rather than any chance to form a personal rapport with her future husband.

A Bride for the Tsar: Bride-Shows and Marriage Politics in Early Modern Russia is a well written and exhaustively researched study of the bride show, one of the most important events at the sixteenth and seventeenth century Russian court. A Tsar’s choice of bride changed the dynamics of his court, bringing an unknown young lady to the throne and her relatives into positions where they could change the course of Russian history.

One thought on “The Romanov Book Reviews 3: A Bride for the Tsar: Bride-Shows and Marriage Politics in Early Modern Russia by Russell E. Martin”