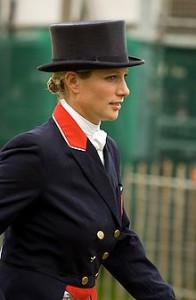 Queen Elizabeth II’s granddaughter, Zara Phillips is currently competing in the equestrian events as a member of Team Great Britain at the 2012 Summer Olympics in London. The royal family has been in the stands at Greenwich Park yesterday and today supporting her quest for Olympic Gold. On Sunday, Zara’s grandfather, Prince Phillip, Duke of Edinburgh, and her mother Princess Anne, herself a former Olympic equestrian competitor, applauded her strong showing in the dressage. Today, a large gathering of Zara’s royal relatives attended the show jumping including her cousins the Duke and Duchess of Cambridge, Prince Harry, Princess Beatrice and Princess Eugenie. Zara commented after the events, “It was incredible, an amazing feeling to be part of the Olympics and to ride for your country and to just be here. The crowd are amazing.” Team Great Britain is thought to have a strong chance of reaching the podium for the equestrian events.

Zara is not the only royal athlete in the 2012 Olympic equestrian events. The Saudi Arabian equestrian team contains two members of the House of Al Saud including King Abdullah’s grandson, Prince Abdullah bin Miteb and his second cousin, Prince Faisal Al Shalan. In contrast to Team Great Britain, which has received twenty seven medals in Olympic history, Saudi Arabia has never received a medal in this event and is not a favourite in the 2012 Games. Prince Faisal, who also competed in the 2008 Summer Olympics in Beijing has commented, “It is good to be underestimated” about his team’s chances of winning a medal. 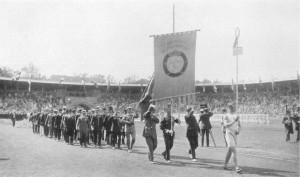 The Opening Ceremonies at the 1912 Stockholm Olympics, the first Games to feature the full programme of dressage, show jumping and eventing.

Zara Phillips, Prince Abdullah bin Miteb and Prince Faisal Al Shalan are following in a one hundred year old tradition of royal participation in the equestrian events at the modern Olympic Games. Although an eclectic collection of equestrian events took place at the 1900 Paris Olympics including polo and mail coach racing, the 1912 Stockholm Olympics were the first Games to feature the full modern program of dressage, show jumping and eventing. From 1912 to 1952, participation in the Olympic equestrian events was restricted to commissioned military officers, a narrow range of eligible athletes that included many of Europe’s princes.

As in London in 2012, there were multiple royal athletes in the 1912 Stockholm equestrian events. Kaiser Wilhelm II’s distant cousin, and nephew by marriage, Prince Friedrich Karl of Prussia was a member of the German team while Tsar Nicholas II’s first cousin, Grand Duke Dmitri was considered the most accomplished equestrian on the Imperial Russian team. With such prominent members of Europe’s royal families competing for medals, the Stockholm Olympic stadium also contained royal spectators.

Postcard of Grand Duchess Marie of Russia, Princess Lennart of Sweden printed at the time of the 1912 Stockholm Olympics.

Grand Duke Dmitri’s sister, Marie, who was married to King Gustaf V’s of Sweden’s second son Prince Lennart, at the time of the Games, attended the equestrian events. She described the Games in her memoirs, Education of a Princess, writing, “That Spring the Olympic games were held in Stockholm, and Dmitri, who was to take part in the mounted events, came with his horses and grooms to stay with me at Oakhill. When the games began we passed whole days in the Stadium, a splendid structure put up for the occasion. The Russian contingent, with the exception of the Finnish group, did not distinguish itself in anything, and the officers, although they were all good horsemen, won no prizes. However, nothing happened to my brother and only one of his companions had a bad fall. During the two months that the games lasted, there were many informal fetes and parties . . .Stockholm seemed to me a different place (p. 147).” In contrast to the Imperial Russian team’s disappointing seventh place showing, Prince Karl Friedrich of Prussia and the German team received bronze medals, making the Prussian Prince the first royal Olympic medalist. 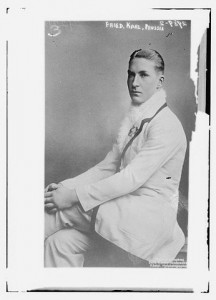 While both royal athletes and royal spectators were present at the Olympics in both 1912 and 2012, Grand Duchess Marie’s account demonstrates how much the Games have changed in the past century. In 1912, the Olympics lasted for eight weeks instead of seventeen days, there was a single venue for all events and no Olympic village in the modern sense of the term to house the athletes. The equestrian events remained all male competitions until 1952 when civilian riders were permitted to participate, a change that allowed royal women to become Olympic equestrian athletes. Along with sailing, the equestrian events are the only Olympic sports where men and women compete directly against one another.

Zara Phillips, Prince Abdullah bin Miteb and Prince Faisal Al Shalan are following in a one hundred year old tradition of royal participation in Olympic equestrian events. In 1912 and 2012, multiple members of the world’s royal houses competed for medals in a sport traditionally associated with royalty.