The last reigning generation of the House of York was not treated kindly by Tudor chroniclers. King Edward IV’s relations with women threatened the stability of his dynasty as his supposed pre contract with Eleanor Butler allowed his brother Richard III to argue that his children with his Queen, Elizabeth Woodville, were illegitimate. George, Duke of Clarence was the incautious opportunist who may have ended his days drowned in a barrel of Malmsey wine for conspiring against King Edward. Richard III was immortalized by Shakespeare as a usurper responsible for the deaths of his relatives. Their sister, Margaret of York, Duchess of Burgundy was “the diabolical duchess,” believed to have supported the claims of various Yorkist pretenders as part of a personal vendetta.

While Richard III’s villainous reputation has been contested by revisionist historians and an entire Richard III society, the characterization of Margaret as a scheming “diabolical duchess” continues to appear to both factual accounts of the reign of King Henry VII and historical fiction about Perkin Warbeck and Lambert Simnel, the Yorkist pretenders. In Margaret of York, Christine Weightman presents “the diabolical duchess” as a multidimensional stateswoman, who had sound political and economic reasons to support attempts to overthrow Henry VII and his Tudor dynasty.

Margaret of York begins with the most significant event in the Princess’s life, her lavish wedding to Charles the Bold, Duke of Burgundy in Bruges, in 1468. Charles and Margaret presided over the most opulent wedding celebrations of the fifteenth century with days of tournaments and banquets that symbolized both the apparent stability of the Yorkist dynasty and the immense wealth of the Dukes of Burgundy, who controlled access the valuable trading centres of the Low Countries. The wedding received particular attention in England because dynastic marriages with foreign royalty were comparatively uncommon during the Wars of the Roses. Both of Margaret’s elder sisters, Elizabeth and Anne, married English noblemen to increase the domestic resources of the House of York during its hostilities against the House of Lancaster.

Weightman’s decision to begin her biography of Margaret with her wedding then look backwards at her youth is astute because childhood, particularly that of women, was of little interest to medieval writers. Nevertheless, the common childhood experiences of George, Duke of Clarence, Margaret of York and the future Richard III appear to have had a profound impact on their future approach to the politics. These three youngest children of Richard, Duke of York and Cecily Neville were still residing with their parents when their family incurred the displeasure of Henry VI’s ambitious consort, Margaret of Anjou and witnessed the most desperate moments in their family’s political fortunes.

In contrast to the Duke and Duchess of York, who appear to have lost significant revenues from indifferent management of their lands and estates, George, Margaret and Richard all grew up to be fiercely protective of their economic and political interests. David Baldwin recently speculated that Richard III was determined to do anything, even overthrow and possibly murder his own nephews, to avoid experiencing the instability of his youth again. Weightman’s portrayal of Margaret suggests that was similarly preoccupied with her wealth and political power. 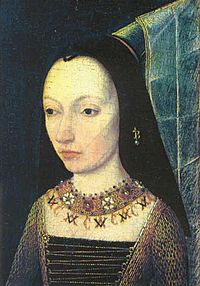 Margaret of York at the time of her wedding to Charles the Bold, Duke of Burgundy in 1468.

The position of Duchess of Burgundy provided the capable Margaret with an outlet for her abilities as a diplomat and stateswomen. She appears to have had a strong relationship with her husband and her stepdaughter, Mary the Rich, heiress to Burgundy and been instrumental in the arrangement of the happy and politically significant marriage of Mary and Archduke Maximilian, heir to the Holy Roman Empire. (Those following this weekend’s wedding of Hereditary Grand Duke Guillaume of Luxembourg to Countess Stephanie Lannoy of Belgium may be interested to know the wedding of Maximilian to Mary prevented modern day Belgium from being absorbed into France.) At the same time, Margaret enjoyed English revenues and trading interests, which came to an abrupt end when Henry Tudor defeated Richard III at the Battle of Bosworth field in 1485.

Weightman’s Margaret of York was therefore not consumed by a personal vendetta against the Tudors but economic and political grievances. King Henry had terminated her English income and pursued a French alliance that threatened the interests of her Hapsburg step-grandchildren. Margaret’s support for the Yorkist claimants significantly coincided with Henry VII’s diplomatic overtures toward France, asserting Maximilian’s interests as well as her own.

Margaret of York is a fascinating study of one of the most significant political figures in fifteenth century Europe. Christine Weightman’s research and analysis rescues “the diabolical duchess” from the one dimensional portrayals of Tudor chronicles and reveals a multifaceted princess, determined to protect the interests of herself and her family in the uncertain world of late medieval Europe.

One thought on “The Medieval Book Reviews 6: Margaret of York: The Diabolical Duchess by Christine Weightman”