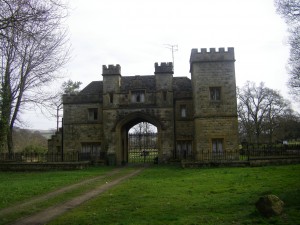 2012 marks the 500th birthday of Katherine Parr, Henry VIII’s sixth wife. Katherine famously survived Henry and then married the handsome Thomas Seymour (brother of Henry VIII’s third wife Jane Seymour) with “unseemly haste” after the King died in 1547. The couple settled at Sudeley Castle in the Cotswolds with a large household including Katherine’s ward, the thirteen year old future Queen Elizabeth I. While Katherine’s first three husbands had been arranged unions to much older men, her marriage to Thomas was a love match and the Dowager Queen intended for Sudeley Castle to be the place where they would raise their future children. Sadly, Katherine died in childbirth in 1548 and her daughter Mary Seymour did not long survive her. The castle came into the possession of Queen Mary I, who granted it to Sir John Brydges, the Lieutenant of Tower of London who attended Lady Jane Grey at the time of her execution. The castle currently belongs to Lord and Lady Ashcombe, who run it as both their home and a museum open to the public.

Sudeley Castle is celebrating the 500th birthday of its most famous resident with a summer long festival showcasing Tudor history and culture. David Starkey, who analyzed Katherine Parr’s time at Sudeley Castle in Elizabeth: The Struggle for the Throne

is serving as historical consultant for festivities and will be giving a lecture. Another famous historian, Alison Weir, who discussed Katherine in The Six Wives of Henry VIII and Children of England: The Heirs of King Henry VIII 1547-1558 will discuss Tudor royal portraits. Michael Hirst, the writer and director of the TV series The Tudors will also be a featured speaker The festival will include plays, concerts of sixteenth century music, archery, falconry and minstrels. In September, there will be an reenactment of Katherine’s Protestant state funeral, the first of its kind in English history. 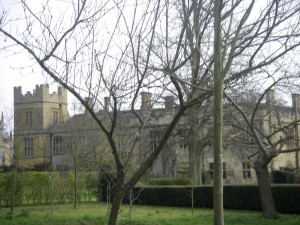 View of Sudeley Castle taken in March, 2009. The castle is open to the public seasonally from April to September.

The festivities in honour of Katherine Parr will have a royal patron, symbolizing Sudeley Castle’s long association with the monarchy. Her Royal Highness, the Duchess of Cornwall stated on becoming the patron of the Quincentenary Festival, “With over a thousand years of history, Sudeley Castle has many stories to tell; but none greater and more inspiring than that of its most famous Tudor resident, Queen Katherine Parr. Having spent many happy times at Sudeley, I am delighted to be Patron of this Festival which will unravel the fascinating life of this historic female character and share it with all who visit the very place where she lived, loved and died in the five hundred year anniversary of her birth.”

The Duchess’s speech alludes to the full scope of Sudeley Castle’s royal history, which long predates Katherine Parr. King Ethelred the Unready gave the Saxon manor house of “Sudeleagh” to his daughter Goda, sister of King Edward the Confessor as a wedding gift. Goda’s son Harold was permitted to keep the estate after the Norman Conquest and it was fortified as a castle when her grandson, John, rejected King Stephen’s rule and instead supported Henry I’s daughter Matilda’s claims to the throne. Another descendant was one of the four knights who murdered Thomas Becket in Canterbury Cathedral. Sudeley Castle became crown property during the Wars of the Roses, enabling King Edward VI to bestow it on his stepmother, Katherine Parr. The Quincentenary Festival will honour a remarkable historical figure and the long association between Sudeley Castle and the monarchy, which continues to the present day.