In 1994, Queen Elizabeth II and Prince Philip, Duke of Edinburgh visited Grand Cayman Island, a British Overseas Territory in the Caribbean to commemorate the 200th anniversary of the Wreck of the Ten Sail. The royal couple dedicated a commemorative monument and park in remembrance of the shipwreck. The visit attracted attention in the international media because the Duke of Edinburgh made one of his famous remarks, asking a Caymanian, “Aren’t you all descended from pirates here?” For the people of the Cayman Islands, however, the royal presence was important because the Wreck of the Ten Sail is one of the most significant events in the history of the Cayman Islands. According to local legend, King George III was so impressed by the bravery exhibited by the Caymanians when they rescued the sailors,  and passengers on the Ten Sail convoy that he forever exempted them from conscription and direct taxation. 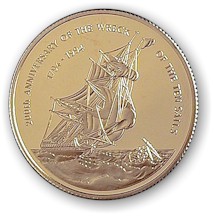 In 1794, Great Britain and France were opponents in the French Revolutionary Wars, which lasted from 1792 until the Treaty of Amiens in 1802. The forces of these two eighteenth century superpowers did not only battle each other in continental Europe but in the Caribbean, where both nations controlled islands that supplied the lucrative sugar trade. In contrast to his predecessors, the mentally unstable King George III did not lead his troops into battle but two of his seven surviving sons, William, Duke of Clarence and Edward, the future Duke of Kent, did military service in British North America and the Caribbean.

In March, 1794, Prince Edward was present for the British invasion of the French island of Martinique, writing to his father, “Permit me to take the earliest opportunity of congratulating your Majesty  on the entire submission of the Island of [Martinique] to your arms. I look upon myself as peculiarly fortunate in having been able to reach this before the trenches opened on Fort George (late Fort Bourbon), principal fortress of this country, having thus been able to follow the progress of the siege from the very commencement of the first battery.” 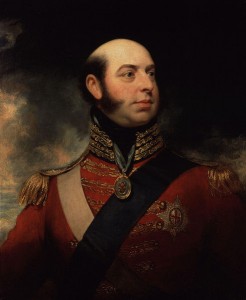 The presence of the King’s sons in the Caribbean theatre of combat attracted widespread local attention as there had not been a senior member of the royal family serving in the region since Charles II’s cousin, Prince Rupert, commanded the royalist navy in the 1650s. Rumours circulated that a royal vessel was among the fifty-eight ships in the convoy that set sail for Great Britain in February, 1794 though there is no evidence that either Prince sailed with these ships.

With naval hostilities raging between British and French fleets in the Caribbean, the merchant ships, carrying sugar, rum and molasses traveled together for their own safety. The convoy was placed under the command of Captain John Lawford, who had served in the American War of Independence. His ship, the Convert, had been captured from the French during an attack on Sainte-Domingue (Haiti) and relegated to escorting merchant vessels because it was too lightly built to withstand a naval battle at sea. Lawford’s orders were to keep the convoy together in all circumstances. 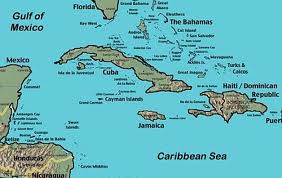 For Captain Lawford, the most difficult piece of navigation in the journey was spotting the Cayman Islands and their surrounding reefs as the convoy sailed westward around Cuba to the Atlantic Ocean. The first English sailing directions for the Cayman Islands were not published until 1827, stating “The Land, [Grand Cayman] is very low and many ships have passed the island in clear moon-lit nights without seeing it; hence an approach to the eastern part, during the night, would be attended with great danger. Indeed every degree of caution should be taken, as it is common for ships to be out of their reckoning, particularly with light winds and variable currents, which frequently prevail hereabout.” 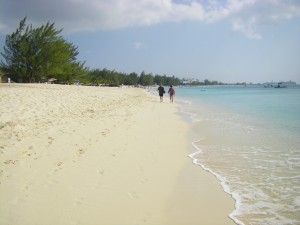 Unfortunately, the Captain both misjudged the location of the Cayman Islands and failed to keep the convoy together before they reached the reefs. Lawford described the disaster that ensued in a letter to his superior, Commodore Ford, Commander in Chief of the Jamaican Squadron:

“About 3 o’clock [am] the Master came down and inform’d me that One of the Ships leeward had fired two guns, on which conceiving it to be a Signal of Distress, I directed him to make sail and run down to her; on my getting on Deck, instantly after this, I found that the guns had been fired by a ship ahead, and that several ships of the Convoy had run ahead since 12 o’clock. I had not been on Deck a Minute before some of the Men on the Topsail Yard called out, ‘Breakers ahead Close to us.’ 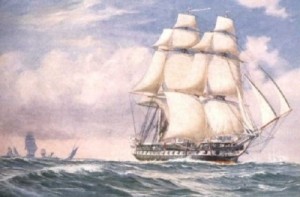 The HMS Unicorn in 1824, a similar frigate to the Convert

I immediately (as the breakers appeared in every direction and I could not tell from the Darkness of the Night to what extent they might run,) deemed it most expedient to make Signal for the Convoy to disperse and do the best for their own Safety that their own judgement could suggest, and as the topsails were all sheeted home, the Convert would have certainly cleared the Breakers, if a Ship ahead had not unfortunately fallen on Board us, and before it was possible to extricate ourselves we got so near the Reefs, that all hopes of Clearing them vanished and she in a few moments struck, and very soon after Bilged.” 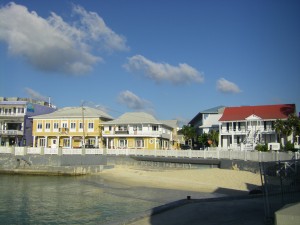 Georgetown, the capital of Grand Cayman, known as Hogsties at the time of the Wreck of the Ten Sail. The white building with the red roof is the old Courthouse, now the Cayman Islands National Museum, one of the oldest surviving buildings on the island.

Ten of the fifty-eight ships in Lawford’s convoy were wrecked but there only six fatalities because the inhabitants of Grand Cayman paddled their canoes to the reefs and rescued the survivors. The influx of 450 stranded sailors, merchants and passengers strained Grand Cayman’s limited resources. The island had only 900 inhabitants at the time, the descendants of deserters from Oliver Cromwell’s Jamaican expedition in the 1650s, runaway slaves and, yes, pirates. One Ten Sail survivor recalled, “Our situation, on arriving at the miserable hovels of the few inhabitants, was only one degree better than that we had escaped from; no dry clothes, no meat, drink or bedding were held out to us; what they had not they could not bestow.”

Captain Lawford spent six weeks on Grand Cayman before enough rescue ships arrived from Jamaica to collect the last of the survivors, living in a makeshift tent on the beach near the wreck site. He was acquitted at his court martial and went on to a distinguished naval career in the Napoleonic Wars. The heroism of the Caymanians in rescuing the survivors of the Ten Sail is immortalized in local legend as the reason why inhabitants of the islands are exempt from direct taxation to the present day. The royal visit to Grand Cayman by the Queen and Duke of Edinburgh in 1994 commemorated one of the most significant events in Caymanian history and affirmed the British Crown’s personal relationship with the islands.

Michael Craton, Founded Upon the Seas: A History of the Cayman Islands and Their People, Georgetown: Randle Publishers, 2003.

Michael Duffy, Soldiers, Sugar, and Seapower: The British Expeditions to the West Indies and the War Against Revolutionary France, Oxford: Clarendon Press, 1987.

Next Weekend: The Duke of Windsor as Governor of the Bahamas During the Second World War