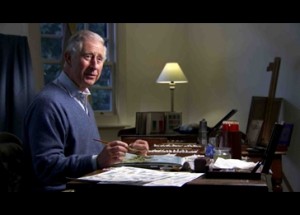 HRH The Prince of Wales during the filming of Royal Paintbox

Today, royalty continue to support and promote the arts. The National Portrait Gallery in the United Kingdom raised its profile when the Duchess of Cambridge became its patron. What is less well known is how many past and present members of the royal family became prolific amateur artists themselves. In The Royal Paintbox, The Prince of Wales shares paintings by royal artists, demonstrating how kings, queens, princes and princesses have expressed themselves through art since Mary, Queen of Scots created intricate embroideries during her nineteen years of imprisonment in England. 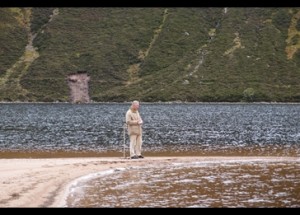 At the heart of the documentary is the Prince of Wales, who discusses his own education as an artist, receiving early lessons in technique from his father, the Duke of Edinburgh, and encouragement to observe the natural world from his grandmother, Queen Elizabeth, the Queen Mother. The Prince grew up surrounded by paintings at Buckingham Palace, Windsor Castle and Balmoral and learned to appreciate art from a young age. His overseas tours provide fresh inspiration for new works of art. The Prince explains how he almost missed a plane leaving Morocco to complete a desert landscape in watercolours.

The artwork shown onscreen provides a new perspective on past royalty including key figures from Canadian history. Prince Rupert, 1st Governor of the Hudson’s Bay Company, was an accomplished printmaker, whose most famous mezzotint, The Great Executioner, depicts the beheading of St. John the Baptist. The Prince of Wales explains that Rupert’s choice of subject matter may have been influenced by the beheading of his uncle, Charles I.  Princess Louise, wife of Lord Lorne, Governor General of Canada from 1878 to 1883, is described by the Prince of Wales as “a seriously good artist” as he showcases her paintings and sculptures.

In addition to narration by the Prince of Wales, the Royal Paintbox includes commentary from a vast array of historians, biographers, artists, and royal relatives. The Duke of Edinburgh’s cousin, Countess Mountbatten of Burma, shows artwork by her grandfather, Prince Louis of Battenberg, including his drawings for the Illustrated London News. The Queen’s niece, Sarah Armstrong-Jones, discusses her work as a professional artist. “Tour artists” reminisce about painting scenes from the Prince of Wales’s overseas tours , showing examples from Australia to Oman. Historians who have written about Queen Victoria and her family including Jane Ridley, author of Bertie: A Life of Edward VII and Jehanne Wake, author of Princess Louise: Queen Victoria’s Unconventional Daughter reveal the importance of art in the lives of the Queen and her children.

The Royal Paintbox is a fascinating glimpse of the private world of royalty through their artwork. With the Prince of Wales as their guide, viewers see how they expressed themselves through paintings, drawings, embroidery and sculpture. From Mary, Queen of Scots to the present Prince of Wales, the royal family have been both patrons and artists for centuries.