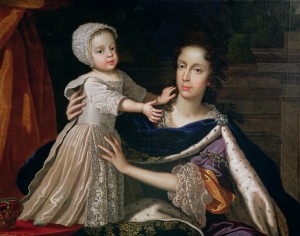 Mary of Modena, consort of James II, with her son James, known as “the warming pan baby “or “the Old Pretender”

My column in the Ottawa Citizen this week discusses the long history of Scotland’s independence being influenced by the arrival of a royal baby. Mary, Queen of Scots succeeded to throne at only six days old and speculation that James II’s son was a spurious, “warming pan baby” contributed to the Glorious Revolution of 1688 and eventual Act of Union in 1707. With the 2014 referendum on Scottish independence on September 18, there is speculation in the British press that the announcement that the Duke and Duchess of Cambridge will have a second child next year may influence Scottish voters to elect to remain part of the United Kingdom.

Click here to read “Will a New Royal Baby Decide the Future of Scotland?”