St. James’s Palace announced today that the Duke and Duchess of Cambridge are expecting their first child. According to the announcement,”The Queen, The Duke of Edinburgh, The Prince of Wales, The Duchess of Cornwall and Prince Harry and members of both families are delighted with the news.”

The early announcement of the royal pregnancy may have been prompted by the Duchess of Cambridge’s hospitalization for Hyperemesis Gravidarum or acute morning sickness at King Edward VII Hospital in Central London. The palace spokesperson stated, “As the pregnancy is in its very early stages, Her Royal Highness is expected to stay in hospital for several days and will require a period of rest thereafter.” 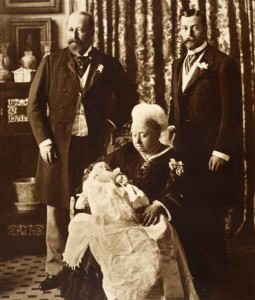 The christening of the future Edward VIII in 1894

The new baby, which is expected in 2013 will be Queen Elizabeth II’s third great-grandchild. The Queen’s grandson, Peter Phillips and his wife Autumn have two daughters, Savannah and Isla Phillips. The arrival of the Duchess of Cambridge’s firstborn child, however, will mark the first time since 1894-1901 that there have been four generations of the direct line of the royal family alive at the same time.

On June 23, 1894, the future King Edward VIII was born at White Lodge in Richmond Park, the residence of his parents, the Duke and Duchess of York, future King George V and Queen Mary. A family photograph taken on the occasion of the royal baby’s christening on July 16 marked the momentous occasion. Queen Victoria holds her newborn great-grandson, the fourth in line to the throne, flanked by her eldest son, the future King Edward VII and her grandson, the future King George V. A similar historic photograph of Queen Elizabeth II, Prince Charles, Prince William and the new baby will undoubtedly be taken at the christening of the Duke and Duchess of Cambridge’s first born child.

The new Prince’s godfather, the Duke of York’s cousin, Grand Duke Nicholas of Russia, who would become Emperor Nicholas II at the end of that year described the christening and photograph in his journal, writing, “At 5 o’clock, the infant son of Georgie and May was christened at White Lodge in the presence of the whole family. Granny gave him seven names [Edward Albert Christian George Andrew Patrick David]. I was one of the godfathers. . . Then we had tea in a marquee in the garden. Four generations had their photograph taken together. There was no rain on the way back,” (Reprinted in Maylunas and Mironenko, A Lifelong Passion, p. 79)  Nicholas was newly engaged to Queen Victoria’s granddaughter, Princess Alix of Hesse-Darmstadt and Queen Victoria encouraged the future Tsar to call her “Granny.”

The British public was equally interested in the birth of a future monarch. The House of Commons tabled a motion to congratulate Queen Victoria on the birth of the new Prince. The only objection was lodged by the first socialist member of parliament, Kier Hardie, who opposed the motion, stating, “From his childhood onward, this boy will be surrounded by sycophants and flatterers by the score . . .A line will be drawn between him and the people he is called upon to some day reign over. In due course . . .he will be sent on a tour round the world, a probably rumours of a morganatic alliance will follow, and at the end of it the country will be called upon to pay the bill! (Reprinted in Philip Ziegler, King Edward VIII, p. 5-6). In light of Edward VIII’s abdication in 1936 and the generous settlement paid to the Duke and Duchess of Windsor by King George VI, Hardie’s prediction of the young prince’s future seems strangely prescient.

The circumstances surrounding the birth of the future King Edward VIII in 1894 provide a precedent for the arrival of the Duke and Duchess of Cambridge’s firstborn child. In 2013, there will once again be four generations in the direct line of succession as there was during the last years of Queen Victoria’s reign.