During my Masters and Doctoral studies in history at Queen’s University at Kingston, one of the Professors on my thesis committee advised me to read the entire King James Bible from beginning to end. A full understanding of the various periods I was studying, including Early Modern Europe (1500-1800), Ireland from 1798 to the present, the expansion of the Early Modern Atlantic World, would not be possible without familiarity with this key aspect of the worldview of the period. And so I bought myself an impressive looking copy of the King James, found a comfortable chair in the reading room at the top of Douglas Library with the stained glass windows and settled in for a long and interesting read. By the time I finished reading the King James Bible, I had gained a great deal of insight into historical change, literature, Renaissance Art and the English language.

In God Save the Queen: The Spiritual Heart of the Monarchy, which has been fully updated and revised on the occasion of Queen Elizabeth II’s Diamond Jubilee, Ian Bradley similarly argues that it is impossible to understand the true significance of the monarchy without a knowledge of its religious history. Bradley, a Reader in Practical History and Theology at the University of St. Andrews, a minister in the Church of England and an author and broadcaster, provides a sweeping history of the relationship between the monarchy and the church, providing a counterpoint to recent conceptions of the royal family as mere celebrities. Bradley’s work is part of a recent revival of interest in the monarchy’s religious role, which includes the writing of John Hall, Dean of Westminster, Queen Elizabeth II and Her Church: Royal Service at Westminster Abbey. 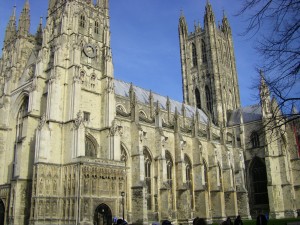 Canterbury Cathedral, seat of the Church of England

Bradley provides the full historical context for debates concerning the religious role of the monarchy including proposed changes to the Act of Settlement to allow dynasts to marry Roman Catholics, and whether the coronation of the next monarch should include representatives from a broad range of faiths. While many books published in honour of the Diamond Jubilee focus exclusively on the current monarch and her immediate predecessors, Bradley looks at portrayals of kingship in the Old and New Testaments then analyzes the full sweep of British religious history from the Arthurian legends to the present day. 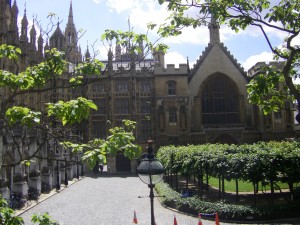 During the course of God Save the Queen, Bradley discusses the conversion of the Saxon monarchs, the conflict between King Henry II and his “turbulent priest” Thomas Becket, King Henry VIII’s break with the Church of Rome, King James I’s comission of a new translation of the Bible, Queen Victoria’s affinity for the low church rituals of the Church of Scotland, and Queen Elizabeth II’s personal piety and devotion to her duties.

One fascinating theme that appears throughout God Save the Queen is the involvement of royal women in religious change throughout British history. Saxon Queens patronized Christian missionaries and exerted political and spiritual influence by persuading their husbands to convert. Medieval Queens and princesses founded religious houses. Queen Elizabeth I reformed the Book of Common Prayer and Queen Victoria was instrumental to the development of the philanthropic monarchy that exists today.

The changes wrought by successive monarchs and their consorts had a profound effect on the current relationship between the monarch and the Church of England. The most significant public occasions involving the royal family have emerged from this religious history including royal coronations, weddings, funerals, and the Queen’s Christmas message. Bradley makes a compelling case for maintaining the monarchy’s religious traditions, which have evolved over hundreds of years instead of dismissing them as  irrelevant in the twenty first century.

God Save the Queen is a fascinating history of the monarchy and the church. Bradley writes in an accessible and engaging style that will appeal to a broad range of readers from specialists in the field of British religious history to general readers curious to know why the Queen addresses the United Kingdom and the Commonwealth every Christmas Day.

One thought on “The Diamond Jubilee Book Reviews 7: God Save the Queen: The Spiritual Heart of the Monarchy by Ian Bradley”