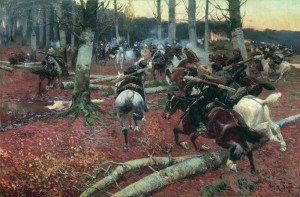 “A Scene from the Caucasian War” by Franz Alekseyevich Roubaud

My latest column in the Ottawa Citizen discusses the expulsion of the Circassian people from Sochi and the surrounding region in 1864, which resulted in the deaths of at least 600,000 people from massacre, starvation and the elements. Although the Olympic Games in Sochi will take place on the 150th anniversary of these events, which the government of neighbouring Georgia has deemed a genocide, Russia has downplayed the bloody history of the region. Russian recognition of the death and displacement of the Circassian people in 1864 would transform the controversial Winter Games into the beginning of a process of reconciliation.

Click here to read the full article in the Ottawa Citizen