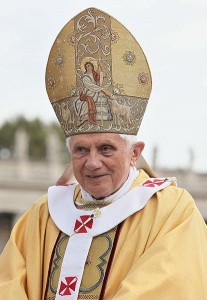 Pope Benedict XVI surprised the world on February 11, 2013 when he resigned from the papacy. Although Pope John Paul II affirmed as recently as 1995 that a Pope could resign, as is permitted by canon law, every pontiff in the past 598 years has died in office. Even in Roman and Medieval times, the resignation of a Pope was an unusual event. Of the six Popes who resigned between 235 and 1415, one was too saintly for Vatican power politics, one was so sinful that he was paid to leave and the others were surplus Popes, asked to leave office because another candidate had been found.

For the seventy-nine year old Celestine V, the papacy was a dangerously worldly office after decades of pious seclusion. As a young man, Celestine had founded a monastic order characterized by solitary prayer and self-denial. His followers were known as the Hermits of St. Diamano. When he became Pope in the summer of 1294, Celestine made mistakes quickly. He lived in Naples instead of the Vatican and was manipulated by the local ruler. Celestine also attempted to leave three cardinals in charge while he fasted in seclusion for advent. 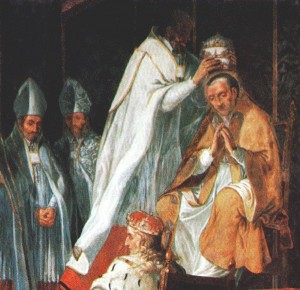 The Coronation of Pope Celestine V

Before the year was over, Celestine wanted nothing more than to return to life as a hermit. In his resignation letter, the departing Pope wrote that he was leaving because of “The desire for humility, for a purer life, for a stainless conscience, the deficiencies of his own physical strength, his ignorance, the perverseness of the people, his longing for the tranquility of his former life.” Sadly, Celestine was denied an old age of quiet contemplation. His successor, Boniface VIII feared that his easily influenced predecessor would be set up as a rival Pope.  Boniface ordered that Celestine be hunted down, dragged from his place of seclusion and imprisoned in a castle. Celestine died ten months later and was canonized in 1313. 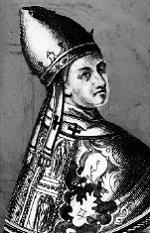 At the other end of the spectrum, Benedict IX was such an immoral Pope that he was paid to leave the Vatican. Benedict became Pope when he was only 18 or 20 through the influence of his wealthy father Alberic III, Count of Tusculum, and immediately became a disgrace to the papacy. Bishop Benno of Piacenza accused Benedict of “many vile adulteries and murders” and one of his successors, Victor III wrote about “his rapes, murders and other unspeakable acts,” concluding, “His life as a pope was so vile, so foul, so execrable, that I shudder to think of it.”

The Cardinals decided this sinful Pope had to leave office and the best way to get him out of the Vatican was a sizable sum of money. Benedict’s godfather bought the papacy, becoming Pope Gregory VII. Unfortunately, the sale wasn’t the last the Vatican heard from Benedict. The former Pope decided he wanted to regain the papacy and invaded Rome. It took the intervention of Holy Roman Emperor Henry III at the Council of Sutri to ensure Benedict’s permanent removal. Benedict spent the rest of his life in the Abbey of Grottaferrata. According to his abbot, he repented his misdeeds as Pope and did penance for his sins.

Four other Popes left office when the political situation abruptly changed and they found themselves redundant. St. Pontian became Pope in 230 under the enlightened rule of Roman Emperor Severus Alexander. Unlike most pagan Roman Emperors, Alexander found other religions fascinating and allowed freedom of worship. Unfortunately, his successor, Maximinus I was a ruler who executed Christians instead of debating their theology. By 235, Pontian had fled Rome, resigning his office in exile.

Pope Silverius also lost the papacy when there was a sudden change in ruler. In 536, the Ostrogoths were in charge of Rome and Silverius duly bought his elevation from King Theodahad. But the very next year, a Byzantine army was at the gates. Silverius had no choice but to abdicate in favour of Emperor Justinian’s candidate. In 1009, Pope John XVIII probably resigned for the same reason as the powerful Crescentii family found a preferable replacement.

The most recent papal resignation took place near the end Great Western Schism of 1378-1417. At this time, there were three men calling themselves the Pope. Gregory XII ruled from the Vatican, Benedict XIII had a rival court in Avignon and a third contender called himself John XXIII. Rather than choose between these three Popes, the Council of Constance decided that they should all resign so a new Pope could be elected. Gregory XII left office in these extraordinary circumstances and spent the rest of his life in peaceful obscurity.