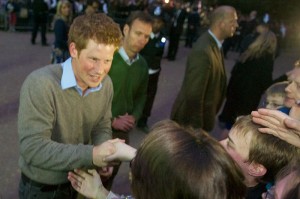 In 2011, the top English baby names were “Harry” for boys and “Amelia” for girls. More than 7,500 baby boys in England and Wales received the name “Harry” in 2011 with another 2,625 named “Henry” the same year. Commentators in the British media have noted that William was also a top ten 2011 baby name for boys in England and Wales, occupying tenth place with 4,632 children receiving the name last year.  The popularity of Harry and William as 2011 baby names appears to reflect the growing public profile of the Duke of Cambridge and Prince Harry within the royal family in the past few years. The near exclusive focus on the presence of “Harry” and “William” at the top of the list of the hundred most popular baby names of 2011, however, ignores the long history of royal influence over English baby name trends, which is reflected in numerous names elsewhere in the top one hundred names for both boys and girls.

Cast of the Effigy of King Henry III in Westminster Abbey, c. 1272.

The 40th most popular English boys name in 2011 was Edward. This name was revived from obscurity by King Henry III when he gave it to his eldest son, the future King Edward I. As Edward I’s biographer Marc Morris explains in A Great and Terrible King: Edward I and the Forging of Britain, the Saxon name “Edward” was a highly unusual choice for the heir to a Norman-French, King of England. Since the Norman Conquest of 1066, royal princes had received suitably Norman names, such as William, Henry or Richard. King Henry III, however, was a great admirer of St. Edward the Confessor and expanded Westminster Abbey as a shrine to the saintly Saxon King. Edward I’s name reflected his father’s religious interests and became the name of seven subsequent Kings and countless ordinary people in England and Wales. 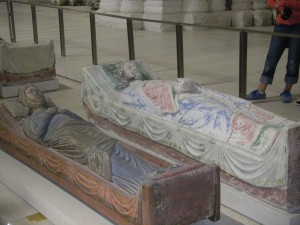 Effigy of Isabella of Angouleme in Fontevraud Abbey in Anjou, alongside the effigy of her brother-in-law, Kign Richard the Lionhearted

Marriages between English monarchs and members of foreign royal houses brought new names to the British Isles that are still among the top one hundred baby names in England and Wales. “Isabelle” or “Isabella” was a common medieval royal name amoung the dynasties that ruled the regions that now comprise France.

King John married Isabella of Angouleme in 1200, King Edward II married Isabella de Valois in 1308 and King Richard II married another Isabella de Valois in 1398. Although the first two Queen Isabellas were controversial figures and the last returned to France after her husband was deposed, the presence of these princesses in England made this variation of “Elizabeth” familiar to the inhabitants of England and Wales. In 2011, 3,464 English and Welsh baby girls received the name Isabella and another 2,719 were named Isabelle making these names the 10th and 17th most popular female baby names in these regions. 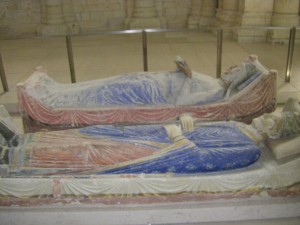 The Provencal name, “Eleanor” also became familiar to England through royal dynastic marriages. Henry II’s formidable consort, Eleanor of Aquitaine lived to be eighty years old and strongly influenced the reigns of her husband and sons, King Richard I and King John. Subsequent influential medieval English Queens were also known as Eleanor including Henry III’s consort and Edward I’s queen, Leonor of Castille. In 2011, Eleanor was the 59th most popular name in England and Wales. 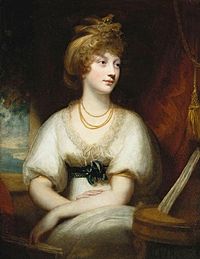 Princess Amelia, the youngest daughter of King George III and Queen Charlotte. In 2011, Amelia was the most popular baby name for girls in England and Wales.

The reigns of the German rulers of Hanover as monarchs of Great Britain in the eighteenth and early nineteenth centuries popularized a new set of names in England and Wales. While some Hanoverian royal names have faded into obscurity, such as Augusta and Octavius, others remain among the most popular English and Welsh baby names. The presence of Amelia, Sophia, Charlotte and Georgia on the list of the hundred most popular names for baby girls in 2011 and George and Frederick on the parallel list of baby boys’ names reflects the continuing influence of the Hanover dynasty over English name trends. These names increase and decrease in popularity depending on the fame of modern figures but it is unlikely they would have become common in England and Wales without royal antecedents.

The presense of Harry and William in the top ten list of English and Welsh baby names for boys in 2011 is not the only evidence of the royal influence over naming trends in the British Isles. Throughout history, individual monarchs and their consorts have popularized little known names, inspiring ordinary people to name their children after well known royal personages. Names introduced by Norman, Plantagenet and Hanoverian royalty remain among the top one hundred most popular baby names for boys and girls in England and Wales.

6 thoughts on “There’s Something About Harry: The Royal Influence Over Baby Name Trends”