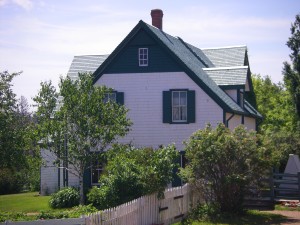 Green Gables in Cavendish, Prince Edward Island, the home of Lucy Maud Montgomery's MacNeill cousins and the inspiration for the Cuthbert home in Anne of Green Gables. The house and grounds are now a National Historic Site.

“All the time I was ironing, I was trying to think of a name for a new island Diana and I have discovered up the brook. It’s the most ravishing spot, Marilla. There are two maple trees on it and the brook flows right around it. At last it struck me that it would be splendid to name it Victoria Island because we found it on the Queen’s birthday. Both Diana and I are very loyal.” — Anne Of Green Gables(1908), Lucy Maud Montgomery.

In nineteenth century Prince Edward Island, where the author Lucy Maud Montgomery (1874-1947) spent her childhood, loyalty to the crown was one of the qualities that united the descendants of the Scottish immigrants who settled along the North Shore. Like membership in the Presbyterian church, devotion to the monarchy was seen as one of the hallmarks of respectability. The Montgomery family had an additional connection to the crown as Lucy Maud’s grandfather, Donald Montgomery was appointed by the Governor General as one of the first senators representing the Province of Prince Edward Island in the Dominion of Canada. In this setting, Montgomery developed a lifelong interest in Europe’s royal families and included elements of the popular royalism that shaped her community in her novels. 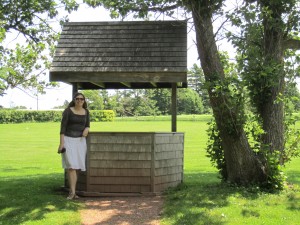 Visiting the grounds of the MacNeill homestead in Cavendish where Montgomery spent her childhood in the care of her maternal grandparents. The original house is no longer standing but the gardens have been restored by descendants of the author's cousins.

In the fictional Avonlea, which Montgomery modelled closely on the actual village of Cavendish where she grew up, the education Anne and her bosom friend Diana received in the one room schoolhouse, the holiday marking the Queen’s birthday and the coverage of royal news in the Island papers would all have encouraged the girls to see themselves as loyal subjects of the crown. With her vivid imagination, enthusiasm for Tennyson poetry, and love of beautiful dresses, an interest in the monarchy would have come easily to Anne.

The significance of the 1860 royal tour of British North America by Queen Victoria’s son and heir, Prince Albert Edward, to Canadian society is also part of the fabric of the eight Anne novels. The tour included a visit to Charlottetown and was long remembered by the inhabitants of Prince Edward Island. In the fifth novel, Anne’s House Of Dreams (1917), the adult Anne hears gossip about one of her unmarried neighbours who danced with the Prince at a ball. “Elizabeth was always very proud of that dance. Mean folks said that was why she never married-she couldn’t put up with an ordinary man after dancing with a prince.” In the intensely monarchist society of nineteenth century British North America, Elizabeth Russell’s pride in having met royalty may be seen as one of the defining moments of her life. 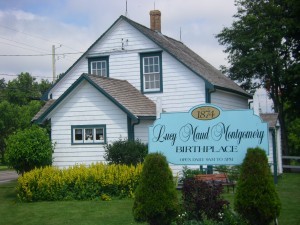 Lucy Maud Montgomery's birthplace in New London, PEI. The author spent the first few years of her life here before moving to Cavendish to life with her grandparents after her mother's death.

In 1923 as the wife of the Reverend Ewan MacDonald in Uxbridge, Ontario, Montgomery reminisced in her journals about the place of Queen Victoria in her island childhood, writing, “When I was a child and young girl the Victoria myth was in full flower. We were brought up to believe that ‘the queen’…was a model for all girls, brides, wives, mothers and queens to follow. In those days every home boasted a framed picture of the queen-a luridly coloured photo sent out as a ‘supplement’ by a popular weekly. There was a crown and lace veil on her head, a broad blue ribbon over her breast and jewels plastered on thickly everywhere… Poor Victoria hadn’t any chance to be bad even if she wanted to be.” Montgomery, and her characters, were fascinated by the actual personality of the symbolic figure that shaped Prince Edward Island society. 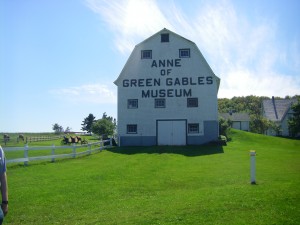 The Anne of Green Gables Museum at Silver Bush. The house was originally the home of Montgomery's aunt and uncle and her wedding took place in the parlour. Montgomery's Order of the British Empire, signed by King Edward VIII is on display here.

As perceptions of royalty changed during the first half of the twentieth century, and the number of royal visits to Canada increased, Montgomery’s characters encountered more varied examples of popular royalism. In Magic For Marigold (1929), Marigold encounters a young woman who claims to be an exiled Russian princess. Marigold is shocked that Varvara speaks of Queen Victoria irreverently, on the grounds that “she’s mother’s aunt.” The fact that the Russian people has “got rid of the Tsar” during the Revolution is mentioned in Rilla Of Ingleside (1921), and the character of Princess Varvara was undoubtedly inspired by the myth of Grand Duchess Anastasia’s survival of her family’s murder that developed during the 1920s.

In common with many other authors writing about Canadian society between the First and Second World Wars, Montgomery created a character who imagined he had a close connection with the future King Edward VIII. In Mistress Pat (1935), the newly hired handyman Mr. Tillytuck urges Patricia Gardiner’s housekeeper Judy Plum to call him by his first name because, “the Prince of Wales called me Josiah the whole time I worked on his ranch in Alberta. A very democratic young man.” Subsequent events reveal that Tillytuck’s stories are largely untrue but he could haveconcocted his story about the Prince of Wales from the extensive coverage of his tours and property in Alberta in the Canadian popular press during the 1920s and 1930s.

Lucy Maud Montgomery’s upbringing on the stauchly rmonarchist Prince Edward Island inspired a lifelong interest in Europe’s royal families that shaped her work as a novelist. From Anne Of Green Gables to Pat Of Silverbush, Montgomery’s heroines engaged with Canada’s rich history of popular royalism, viewing themselves and their communities as part of a worldwide British Empire.

Next Week: Following in the Footsteps of the Duke and Duchess of Cambridge at Dalvay by the Sea