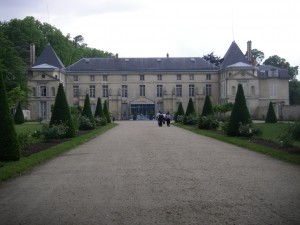 Malmaison, Empress Josephine's favourite residence and a prominent setting in Sandra Gulland's Josephine B. trilogy. Despite the ominous sounding name, it remains a pleasant place to visit with extensive rose gardens and exhibitions about First Empire France.

The overthrow of Louis XVI and Marie Antoinette during the French Revolution, and the rise and fall of Napoleon Bonaparte and his wife Josephine during the First Empire are pivotal events in numerous historical novels. Marie Antoinette, in particular, has been the subject of historical fiction for two centuries because she captured the popular imagination as a tragic figure. As with the Tudor themed historical novels that I discussed last week, fictional approaches to the French court vary from rigorously researched novels that contain material from primary sources of the period to stories loosely inspired by actual events. Here are my favourites, chosen for their attention to historical detail, literary merit, engaging characters and page turning plot.

Of all the historical novels centering on the life of Queen Marie Antoinette, my favourite is Sena Jeter Naslund’s Abundance: A Novel Of Marie Antoinette, which was first published in 2006. Naslund has a gift for writing evocative, literary, historical fiction as demonstrated by her previous work, Ahab’s Wife: Or, The Star-gazer, which expands on the brief reference to Captain Ahab’s wife in Moby-Dick. Despite Marie Antoinette’s reputation for flightiness, Naslund convincingly crafts an introspective voice for the Queen, focusing on her struggle to assimilate into the French court following her upbringing in the Hapsburg Empire, France’s traditional enemy. The novel encompasses the full sweep of Marie Antoinette’s experiences from her marriage to her execution, incorporating actual excerpts from her correspondence including her last letter, which entrusted her children to her loyal sister-in-law, Madame Elizabeth.

For novels that encompass both the French Revolution and the First Empire through the fictional diaries of one extraordinary woman, I recommend the Josephine B Trilogy by acclaimed historical novelist Sandra Gulland. The three novels, Many Lives & Secret Sorrows Josephine B, Tales Of Passion Tales Of Woe and The Last Great Dance on Earth take the reader from Josephine’s youth on a tumbledown sugar plantation in Martinique through her marriage to a callous French aristocrat, her imprisonment in the Conciergerie during the French Revolution, the establishment of her social circle and her time as Napoleon’s partner and consort before the collapse of their marriage.

Gulland takes a sympathetic approach to Josephine’s adventures, avoiding the sensationalism that appears in certain other fictionalized accounts of the First Empire. The trilogy format allows the numerous interesting figures whom Josephine encountered during the Ancien Regime, French Revolution, Directory period and First Empire to become fully realized characters in the novels. For readers who finish Gulland’s books and are interested following up with a fascinating novel about Josephine’s daughter Hortense de Beauharnais, who became the mother of Napoleon III, I recommend A Rose for Virtue by Norah Lofts, which brings this little known historical figure to life.

No summary of historical fiction set in eighteenth and nineteenth century France would be complete without a mention of Victor Hugo’s masterpiece, Les Miserables. Although the action does not unfold in a court setting, the characters personify the full political spectrum in nineteenth century France from ultraroyalism to republicanism demonstrating the complex attitudes that existed toward the French monarchy and Empire in both Hugo’s time and the decades encompassed by his work. Fans of the musical will find the full depth and historical context for the story in this engrossing novel.

Next weekend: Historical fiction set at the court of Emperor Nicholas II of Russia

5 thoughts on “Royal Historical Fiction Roundup 2: The French Court in the 18th and 19th centuries”