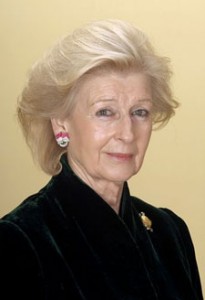 Queen Elizabeth II’s cousin, Princess Alexandra, the Honourable Lady Oglivy will be visiting Victoria, British Columbia this weekend to celebrate the centennial of the Canadian Scottish Regiment (Princess Mary’s). Alexandra has been the Colonel-in-Chief of this regiment since 1977. On Saturday October 20, the Princess will attend a cadet lunch at the historic Empress hotel, which was named for Queen Victoria, the namesake of the capital of the province of British Columbia. That evening, Alexandra will also attend a gala dinner at the Bay Street Armoury to celebrate the centennial of her regiment.

On Sunday, October 21, the Canadian Scottish regiment will participate in a Church Parade at Christ Church Cathedral and the Princess will lay a wreath in honour of fallen soldiers in Pioneer Square. Following the celebration of the centennial of her regiment, Alexandra will leave Canada and travel to New York City where she will attend a reception, gala dinner and board meeting in her capacity as Honourary Patron of the American Associates of the Royal Academy Trust. 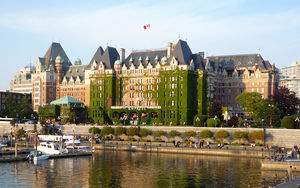 The Fairmont Empress hotel in Victoria

Princess Alexandra’s upcoming engagements in Canada, the third Canadian royal visit in 2012, are part of a Personal Visit and has not received any media coverage outside the local newspapers. The Princess is a comparatively unknown member of the royal family in Canada despite her long history of carrying out Canadian engagements as a representative of Queen Elizabeth II and in her capacity as Colonel in Chief of various Canadian regiments.

When King George VI died in 1952, there were only five princesses by birth in the royal family: the new Queen, Elizabeth II, her sister, Princess Margaret, her young daughter, Princess Anne, Queen Victoria’s granddaughter, Princess Alice of Athlone, former Vice Regal Consort of Canada, and Princess Alexandra of Kent. Although junior royal princesses rarely undertook a full program of royal engagements, the Queen asked her cousin to become a full time working member of the royal family. The involvement of the Queen’s cousins in royal duties allowed the monarch to expand the personal presence of her family in the commonwealth.

When Canada celebrated the 100th anniversary of confederation in 1967, cross country train journeys by the monarch were no longer commonplace. The last royal tour of Canada including stops in all provinces in territories had been the 1959 visit of Queen Elizabeth II and the Duke of Edinburgh. To celebrate Canada’s centennial, multiple members of the royal family traveled to diverse regions of Canada.

The Queen and the Duke of Edinburgh attended the formal celebrations in Ottawa then visited Expo 67 in Montreal. That same year, Princess Alexandra and her husband, the Honourable Angus Oglivy undertook a twenty-seven day official tour focused on Western Canada. The royal couple visited Toronto, Vancouver, Victoria, Banff, Calgary, Edmonton, Whitehorse, Yellowknife, Jasper, Hay River, Regina, Brandon, Winnipeg and Ottawa before also ending their Canadian sojourn at Expo 67 in Montreal. The schedule was extremely busy, even by the standards of a royal tour, prompting a headline in the Ottawa Citizen newspaper, “Royal Stamina put to the test.” 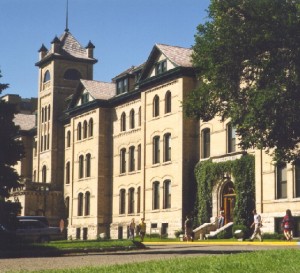 Brandon University in Manitoba, which received its charter from Princess Alexandra in 1967

Although Princess Alexandra’s 1967 tour is little known today, it received tremendous publicity at the time. The Ottawa Citizen included a photograph of Alexandra chatting with children outside Toronto’s City Hall, who were thrilled to meet a “Real Life Princess.” Alexandra’s donation of a collection of her grandmother Queen Mary’s books to the Toronto Public Library was extremely well received as the Princess stated, “There could be no better home for my grandmother’s collection.” The Calgary Herald admired both the Princess’s sense of style and her close engagement with the Queen’s Own Rifles as Colonel in Chief. The Saskatoon Star-Phoenix published a lengthy profile of the Queen’s cousin, describing Alexandra as “Hardworking, glamorous and anything but stuffy.” The 1967 tour was a great success that endeared Princess Alexandra and the monarchy to Canadians.

Since 1967, Princess Alexandra has visited Canada on five subsequent occasions, usually in her capacity as Colonel-in-Chief of Canadian regiments. The Princess’s attendance at the 2012 centennial celebrations for the Canadian Scottish regiment reflect her longstanding involvement with the Canadian Forces and broader engagement with Canadian institutions.