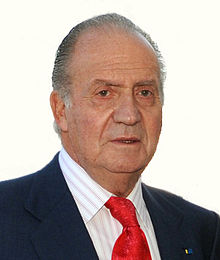 This past week, prominent members of the Spanish royal family have been injured in hunting accidents in circumstances that have provoked widespread criticism of King Juan Carlos. The King is usually treated with deference in the Spanish press because he successfully oversaw Spain’s transition from dictatorship under Francisco Franco to the current democratic constitutional monarchy. In contrast, reports that both the King and his grandson, Don Frolian, have recently been injured on hunting trips have provoked accusations of extravagance and cruelty to animals. The press has also revisited the history of hunting as a royal pastime, discussing the unfortunate history of royal hunting accidents, which has closely  impacted the Spanish royal family.

On April 9, Juan Carlos’s thirteen year old grandson, Don Felipe Juan Frolian de Marichalar, the son of Infanta Elena, Duchess of Lugo,was rushed to hospital following a shooting accident. Don Frolian was apparently doing target practice outside the family home in Madrid when he accidentally emptied the contents of his 36 gauge shotgun into his foot. Surgery has been successful and he is expected to make a full recovery. There have been reports that Don Frolian’s father, Jaime de Marichalar, may be prosecuted as it is illegal for children under the age of fourteen to handle firearms in Spain.

On April 14, King Juan Carlos himself suffered a broken hip after a fall during an elephant hunting trip in Botswana. News of the circumstances surrounding the King’s injury provoked widespread controversy because he is the honourary president of the World Wildlife Fund in Spain (WWF), and this form of big game hunting is a very expensive pastime for the head of the nation suffering from a recession and widespread unemployment.  The seventy-four year old King has had hip replacement surgery and is also expected to make a full recovery after a six week period of convalesense. 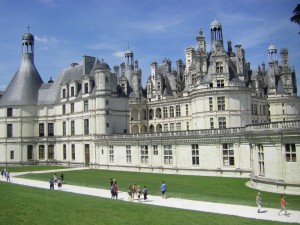 The Chateau Chambord in the Loire Valley, France. The Chateau was a favourite hunting lodge of King Francois I.

Hunting used to be a universal royal pastime. During the Middle Ages and Early Modern period, the game inhabiting crown lands in much of Europe was the personal property of the monarch and penalties for poaching were severe. The skills necessary to lead a successful hunting expedition including horseback riding and use of weaponry were considered crucial for Kings, who were expected to lead their troops into battle until the eighteenth century. With the expansion of European Empires in the nineteenth century, Imperial tours by royalty often included hunting expeditions for tigers in India or elephants in Africa. Hunting declined in popularity after the Second World War but continues to attract royal enthusiasts, despite crown patronage of animal welfare organizations. 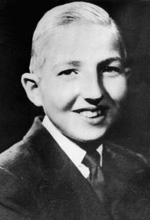 Where there is hunting weaponry, there is potential for accidents. While King Juan Carlos and his grandson are expected to recover fully from their injuries, past members of royal families have been killed by weapons used in hunting expeditions. In 1956, King Juan Carlos’s younger brother, Infante Alfonso died at the age of fourteen in a gun related accident in a family home in Estoril, Portugal. According to the official statement released by the Spanish embassy in Portugal, “Whilst His Highness Prince Alfonso was cleaning a revolver last evening with his brother, a shot was fired hitting his forehead and killing him in a few minutes.” The circumstances surrounding Alfonso’s death are discussed in greater detail in the biography Juan Carlos: Steering Spain from Dictatorship to Democracy by Paul Preston. 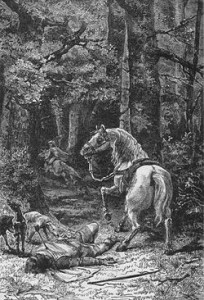 An 1895 lithograph imagining the death of King William II.

In English history, the death of King William II (r. 1087-1100) in a hunting accident provoked centuries of speculation that the monarch was the victim of a political coup engineered by his younger brother and heir, King Henry I (r. 1100-1135). William was hunting the New Forest with a large party including his brother Henry and the nobleman Walter Tyrell when he was struck by an arrow that pierced his lung. Although the Anglo-Saxon chronicle states only that he was “shot by an arrow by one of his own men,” Tyrell’s flight from England and Henry’s immediate ascension to the throne over the claims of his elder brother Robert, Duke of Normandy sparked rumours that this hunting accident was actually an assassination. William II’s biographer Frank Barlow discusses the circumstances of the King’s death extensively in William Rufus.

The recent accidents suffered by King Juan Carlos of Spain and his grandson Don Frolian have reopened the popular debate about whether hunting is still an acceptable pastime for royalty. The Spanish royal family have been criticized for engaging in activity regarded as extravagant, dangerous and cruel to animals. It remains to be seen whether these critiques will influence subsequent royal attitudes toward hunting.