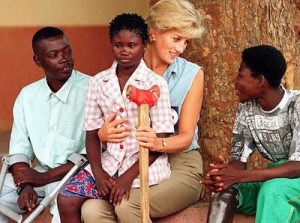 Diana, Princess of Wales, visiting with victims of land mines in Angola in 1997.

A few months before her death in August, 1997, Diana, Princess of Wales visited Angola as a supporter of the the International Campaign to Ban Landmines. Both Diana’s choice of a politically sensitive cause and her physical engagement with children who had lost their limbs to these hidden, explosive devices were characteristic of her approach to the traditional royal practice of philanthropy. In common with medieval and early modern royalty popularly believed to possess “the healing touch,” Diana held hands with AIDS patients and embraced ill and injured children. Fifteen years after her death, the public expects royalty to personally engage with the beneficiaries of their philanthropy, demonstrating the Princess of Wales’ continuing influence over the monarchy.

King Charles II touching scrofula sufferers. The monarch's touch was believed to cure this disfiguring condition until the eighteenth century.

When Diana held hands with patients in hospitals, she was not introducing a new way for royalty to engage with ordinary people but instead reviving the ancient practice of the royal healing touch, which persisted until the eighteenth century. In his religious history of the monarchy, Ian Bradley states, “Alongside her role as a celebrity and media superstar, Diana took on an iconic and spiritual status which at one level resembled nothing so much as the sacred aura of medieval monarchy with its magical healing touch (Bradley, God Save the Queen: The Spiritual Heart of the Monarchy, p. 204).”

Medieval monarchy was intensely personal. Kings and Queens reinforced their authority by connecting with their subjects on a physical level. Royalty dispensed alms directly to the poor outside churches or palaces and washed the feet of underprivileged parishioners during Maundy Thursday services. The monarch’s touch was believed to cure the disfiguring symptoms of scrofula, a form of tuberculosis of the neck glands now known to arise from consuming unpasteurized milk. 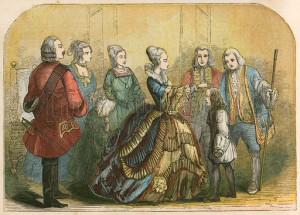 A 19th century artist's depiction of Queen Anne touching the young Samuel Johnson, who suffered from scrofula as a boy.

Both the monarchs of England and France held ceremonies where scrofula sufferers were presented at court to have their swollen neck glands touched by the sovereign. These ceremonies were comparatively rare by the reign of King Charles I (1625-1649), who also reduced the number of royal progresses and other opportunities for personal engagement between the monarch and his subjects. The circumstances of the Restoration of the British monarchy in 1660 revived the healing ceremonies as Charles II sought to reinforce the personal relationship between the ruling dynasty and its subjects. Charles II’s niece, Queen Anne, was last British monarch to touch scrofula sufferers as her second cousin and successor, King George I, deemed these ceremonies to be “too Catholic.”

The emergence of the philanthropic monarchy occurred during the eighteenth century and therefore reflected the sensibilities of the Hanoverian monarchs rather than their more tactile predecessors. King George III, Queen Charlotte and their children dutifully opened hospitals and donated to charitable causes but did not embrace the patients. George III’s and Queen Charlotte’s approach to philanthropy informed what is now perceived as the traditional approach to royal charitable patronage. Queen Elizabeth II’s only daughter, Princess Anne, is one of the most active members of the current royal family in the charitable sector but she is never photographed holding the children who benefit from her patronage of Save the Children. 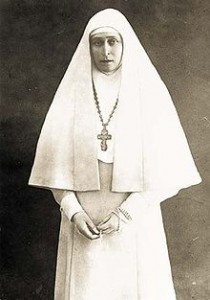 Queen Victoria's granddaughter, Grand Duchess Elizabeth of Russia in the robes of the Order or Martha and Mary that she founded in 1910.

Although the majority of royal philanthropy prior to Diana’s activities reflected the sensibilities of the Georgian monarchs, the older tradition of personal contact between royalty and the less fortunate did not entirely disappear. Queen Victoria’s granddaughter, Elizabeth of Hesse-Darmstadt (1864-1918), who married Emperor Nicholas II of Russia’s uncle, Grand Duke Sergei, founded an order of working sisters that personally engaged with the poor of Moscow during her widowhood.

There are numerous parallels between Grand Duchess Elizabeth and Diana, Princess of Wales. In her youth, Elizabeth was considered one of the most beautiful princesses in Europe and was the focus of popular speculation regarding her percieved unhappy marriage to Sergei.

As Head Abbess of the Order of St. Mary and St. Martha, Elizabeth combined hands on charity work in the poorest slums of early twentieth century Moscow with a continued interest in fashion. In contrast to the dark robes worn by other orders of Russian Orthodox nuns, Elizabeth commissioned religious artist Michael Nesterov to design soft grey baize robes for her order with wimples and veils. The Grand Duchess’s own robes were created by the House of Pacquin in Paris (King and Wilson, The Court of the Last Tsar: Pomp, Power and Pageantry in the Reign of Nicholas II, p. 81).

Like Diana, Elizabeth’s image and charity work inspired a broad range of responses from the admiration and gratitude of the poor women and children assisted by her convent to the scepticism of the traditional nobility and clergy who questioned the Grand Duchess’s personal image and innovations within the traditional hierarchy of religious orders. Elizabeth was murdered by Russian revolutionaries in 1918 and was eventually canonized by the Russian Orthodox Church. Her example inspired the philanthropy of her niece, Princess Alice of Greece, the mother of Prince Philip, Duke of Edinburgh. 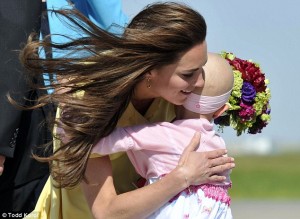 The Duchess of Cambridge embracing Diamond Marshall during her 2011 tour of Canada. Photo Credit: Todd Korol

Diana, Princess of Wales’ personal engagement with the recipients of her philanthropy appeared to be a entirely new way for royalty to connect with ordinary people but actually mirrored medieval conceptions of the royal healing touch. Various members of the extended royal family, including Grand Duchess Elizabeth of Russia and Princess Alice of Greece continued to have physical contact with the less fortunate after more detached expressions of royal philanthropy became prevalent.

Diana’s willingness to hold hands with AIDS patients and embrace children injured by land mines brought this older form of royal humanitarian work back into the mainstream. When the Duchess of Cambridge embraced six year old cancer survivor Diamond Marshall in Calgary in 2011, she continued Diana’s example of reaching out and touching ill and underprivileged children.

Next Week: Diana, Princess of Wales and the Public Perception of Royal Parenting