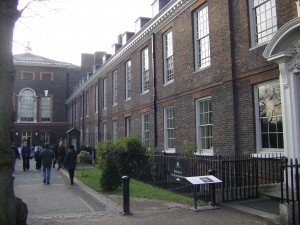 View of the entrance to Kensington Palace taken in January, 2009, before the recent refurbishment of the public galleries.

The state rooms of London’s Kensington Palace have recently been reopened to the public after a $20 million renovation project. Historic Royal Palaces, the charity that administers the public wing of the palace along with the Tower of London, Hampton Court, the Banqueting House at Whitehall and Kew Palace have unveiled a new stately entrance, new gardens and previously inaccessible areas such as the red saloon, when the eighteen year old Queen Victoria held her first meeting of the privy council. The new design of the museum includes art installations designed to help visitors navigate the palace and costumed staff to tell the stories of famous occupants such as Princess Diana and Queen Victoria. The private apartments will also be refurbished for new royal tenants. The Duke and Duchess of Cambridge will use the apartment that once belonged to the late Princess Margaret as their London residence (it is currently used for special exhibitions in the renovated museum). 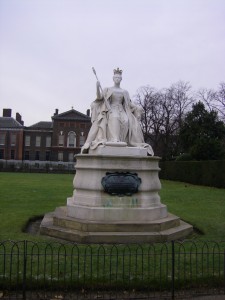 Statue of Queen Victoria in Kensington Gardens, sculpted by her daughter Princess Louise, the Duchess of Argyll

Admirers of the renovations praise the new layout, accessibility and design of the palace museum. Unfortunately, these positive reviews have been accompanied by disproportionately negative descriptions of what the palace looked like before it was redesigned. Here in Canada, Patricia Treble of Maclean’s Magazine wrote that prior to the renovations, “After [tourists] plunked down $20 for an adult ticket, they got little for their money but a stroll through a confusing maze of rooms devoid of interesting features, listening to a boring commentary on what used to be here or was once there.” Having visited the palace in 2009 and taken the entire audio tour, I believe that this assessment is unfair. The former Kensington Palace museum clearly provided a different experience than the newly renovated space but it was still a fascinating and engaging place to visit.

After paying the reduced rate for my student ticket, I began on the garden floor, enjoying the ceremonial dress collection. There was interesting commentary about the difficulties reconciling changing court dress to twentieth century changing fashions. Attaching the a feathered headdress to a 1920s bobbed hairstyle was particularly difficult. A number of the late Princess Diana’s dresses were also on display with commentary on her decision to auction much of her 1980s wardrobe for her charitable causes. 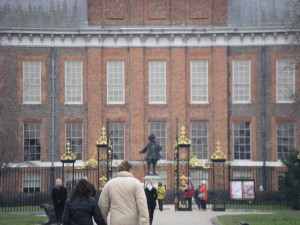 View of Kensington Palace with the statue of King William III, the first royal resident.

The state rooms upstairs provided a glimpse of palace life in the time of King William III and Queen Mary II. After becoming King of England in 1688, William found that the sooty air around Whitehall Palace aggravated his asthma but Hampton Court was too removed from the seat of his government. The purchase of Kensington Palace combined fresh air with relative proximity to Westminster. William’s wife and co-ruler Mary devoted attention to refurbishing the gardens, commissioning the planting of centerfolia roses, which were much admired in the seventeenth century. The rooms where Queen Victoria spent her childhood in the early nineteenth century were also well presented, highlighting her difficult relationship with her mother, the Duchess of Kent. 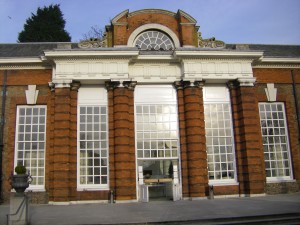 The Kensington Palace Orangery, which is now a restaurant and special event venue.

In 2009, the special exhibition was “The Last Debutantes” about the final parade of unmarried aristocratic women presented to the sovereign in 1958. The galleries included dresses from the period, and interesting taped interviews with surviving debutantes, and the young men who danced with them during the social season. The exhibition sparked my interest in the experiences of these women and I read Fiona McCarthy’s fascinating account, Last Curtsey

during my time in London.

I look forward to seeing the renovated Kensington Palace the next time I visit London but will always have good memories of visiting the old palace museum.