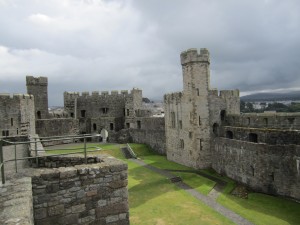 In 1538, King Henry VIII of England received a report that Caernarfon Castle in Wales was “moche ruynous and ferre in decaye for lackke of tymely reparations.” With the Tudor dynasty on the throne, descendants of Henry V’s widow, Katherine of Valois and her Welsh steward, Owen Tudor, there was less need for fortifications to keep the English and Welsh apart, as a conquering Edward I intended in the late thirteenth century. By the reign of King James I (1603-1625), only the Eagle Tower and King’s Gate still had roofs and the buildings inside the castle were “all quite faln down to the ground and the Tymber and the rest of the materialls as Iron and Glasse carried away and nothing left that [is] valiable.” 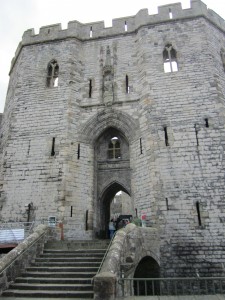 The magnificent ruins of Caernarfon Castle still bear the evidence of centuries of neglect. Reaching the top of the Well Tower, which once housed the the massive castle cistern, requires a long climb up a stone spiral staircase into the darkness above. The narrow steps are uneven from centuries of use and exposure to the elements. (The Well Tower was still unfinished in the 14th century and did not receive a roof until the 19th century restoration of the castle). There are ropes to assist visitors up the medieval steps to see Edward I’s view of the village of Caernarfon and waterfront. Once at the top, Edward I’s plans for his new castle become clear. There is space for an entire royal household in the turrets as well as massive fortifications designed to enforce England’s conquest of Wales.

In 1282, Llywelyn “the Last,” the final Welsh ruler from the House of Gwynedd died in battle against English forces. Edward I seized the opportunity for a complete conquest of Wales. The King sent Llywelyn’s only child, Gwenllian ferch Llywelyn, to a distant Lancashire convent and began construction of a series of castles around Wales. Edward I’s queen, Eleanor of Castile, accompanied the King on the 9th Crusade and she was also present for his occupation of Wales. In 1284, the royal couple’s son, the future Edward II, was born in Caernarfon during the construction of the Castle. 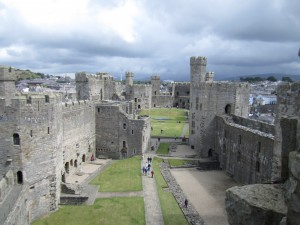 According to a legend dating from the 16th century, Edward I promised the Welsh a prince, “borne in Wales and could speake never a word of English,” beginning the practice of the King’s eldest son serving as Prince of Wales. While some of these Princes, including Henry VIII’s elder brother, Arthur, spent time in Wales learning the business of kingship, more than half of the “Princes of Wales” never visited Wales. Caernarfon Castle rarely served its intended purpose as a Welsh residence for the Prince of Wales. Instead, the castle became a local prison and storage facility for armaments, gradually falling into disrepair. 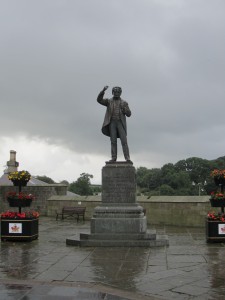 The castle returned to prominence in the 20th century when it became the site of investiture for Princes of Wales. In 1911, David Lloyd George, the future Prime Minister and member of parliament for Caernarfon Burroughs, was Chancellor of the Exchequer, and he favoured  a Welsh investiture ceremony for the future Edward VIII as Prince of Wales. The ceremony, which took place in Caernarfon Castle, sped the restoration work.

In 1969, the current Prince of Wales, Prince Charles, was also invested as Prince of Wales in the castle. In contrast to previous Princes of Wales, Charles made efforts to learn the language and customs of Wales before his investiture, completing part of his university education in Aberystwyth. The current royal family continues to maintain close links with the region.

Following their wedding in 2011, William and Catherine, the Duke and Duchess of Cambridge, resided in Anglesey while William worked as a Search and Rescue pilot. Edward I arrived in Wales as a conqueror but William and Catherine arrived as residents eager to blend into their surroundings, finding a degree of privacy and normalcy in the early years of their marriage. Caernarfon Castle is now a World Heritage Site and one of the most popular tourist destinations in Wales.

Next: Cornet Castle in Guernsey, the last Royalist stronghold during the English Civil Wars