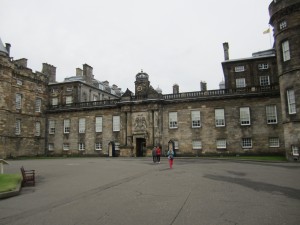 The Palace of Holyroodhouse

The Palace of Holyroodhouse in Edinburgh is Queen Elizabeth II’s official residence in Scotland. Every year, the Queen resides at the Castle for “Royal Week,” hosting garden parties on the Holyroodhouse grounds and inducting new members into the ancient Order of the Thistle. If Scotland votes to secede from the United Kingdom in September, the Queen’s successor may have a separate Scottish coronation at Edinburgh’s St. Giles Cathedral.

The Queen has a close affinity for Scotland. She spent her childhood summers visiting both sets of grandparents there: King George V and Queen Mary at Balmoral and the Earl and Countess of Strathmore at Glamis Castle. Elizabeth II is not the only Queen who has made her mark on the Palace of Holyroodhouse. Here are 5 Scottish and English queens who contributed to the development of the modern palace: 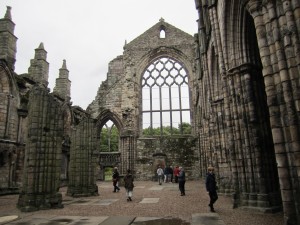 The ruins of Holyrood Abbey

1) St. Margaret (1045-1093) Malcolm III’s queen, Margaret, chose Edinburgh as Scotland’s capital, persuading her husband to move his court there from Dunfermline. Margaret was renowned for her piety and education and transformed the Scottish court into a centre of learning. One of the holy relics in her possession was a fragment of the “holy rood” or true cross. In 1128, Margaret’s son, David I, founded Holyrood Abbey to house the relic.

2) Margaret Tudor (1489-1541) When James IV negotiated his marriage to Henry VII’s elder daughter, Margaret, he decided to transform to royal apartments at Holyrood Abbey into a Renaissance Palace between 1501 and 1505. James IV was well versed in history and spoke multiple languages. The construction of  the Palace of Holyroodhouse was intended to impress the King’s English bride and proclaim to the world the Scottish court was the equal of other European royal establishments. 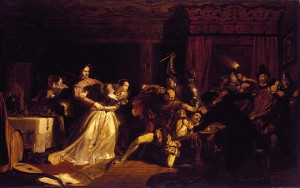 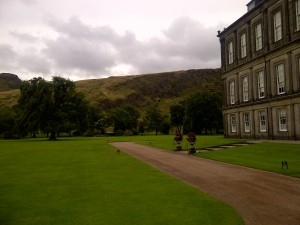 4) Catherine of Braganza (1638-1705) Charles II’s Portuguese queen, Catherine of Braganza, never visited the Palace of Holyroodhouse. Following the restoration of the English and Scottish monarchies in 1660, however, Charles II ordered extensive improvements to the palace for himself and his bride including new apartments for the queen. The King appointed architect Sir William Bruce to oversee additions to the palace including the modern quadrangle. Catherine also had a strong cultural impact on Britain – she popularized tea drinking at a time when coffee was the preferred beverage of the aristocracy.

5) Queen Victoria (1819-1901) Queen Victoria discovered Scottish culture through the novels of Sir Walter Scott and developed a strong affinity for Scotland. While her predecessors largely neglected Holyroodhouse, Victoria spent part of her year in Scotland, attending official engagements in Edinburgh and holidaying at her private residence, Balmoral. While in Scotland, Victoria immersed herself in Scottish culture, dressing her children in tartans, listening to readings of Robert Burns poems and even assuming a Scottish accent. The relationship between the monarchy and Scotland has remained close since Victoria’s reign.

Further Reading on the Palace of Holyroodhouse, Scotland’s Palaces and Scottish Monarchs

John Dunbar, Scottish Royal Palaces: The Architecture of the Royal Residences During the Late Medieval and Early Renaissance Periods

Jean Plaidy, The Thistle And The Rose

ReayTannahil, Fatal Majesty: A Novel of Mary Queen of Scots

Next: The Investiture of Prince Charles at Caernarfon Castle in Wales