Queen Elizabeth II and Prince Philip, Duke of Edinburgh leaving the Royal York hotel in Toronto on a tour of Canada in 2010. The Queen and Prince Philip have remained active public servants long after many of their contemporaries have retired.

Queen Elizabeth II turned 86 today, an occasion publicly marked by 41 gun salutes in Hyde Park and the Tower of London. The Queen is celebrating her actual birthday privately with her family. She will celebrate her official birthday on June 16, by presiding over the annual Trooping of the Colour parade. On Thursday evening, Buckingham Palace will be illuminated with colourful images of the sovereign. Elizabeth II is the most senior monarch ever to reign in the British Isles, having lived longer than Queen Victoria or King George III, who both died at the age of 81. George III was incapacitated by mental illness in his later years and Victoria’s Diamond Jubilee thanksgiving service in 1897 was held on the steps of St. Paul’s cathedral because she could not climb the stairs to reach the church itself. In contrast, the current Queen and her consort, the Duke of Edinburgh, continue to perform a full calendar of public duties, traveling throughout the United Kingdom this year to mark the Diamond Jubilee. Queen Elizabeth, the Queen Mother lived to the age of 101, and there is every indication that her daughter will continue to be an active Head of State for years to come. 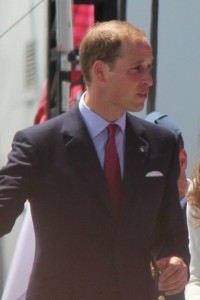 Elizabeth II’s long reign has contributed to the popular perception that monarchs should be elder statesmen who can advise Prime Ministers from their wealth of experience. The Queen has worked with a dozen British Prime Ministers and at least one hundred and fifty Commonwealth Heads of Government. In Robert Hardman’s recent study of Elizabeth II’s reign, Our Queen, Prince William discusses how meetings between the Queen and her ministers are appreciated by both parties, stating, “If you think how many meetings she’s had with different prime ministers at different times it’s incredible . . .Some of them must wish she would turn round and tell them what to do! But she always speaks very highly of having these meetings.” Since the Queen has reigned since 1952, she brings six decades of experience in politics and foreign affairs to these meetings. She has also personally met the majority of international leaders who have held office since the 1950s. 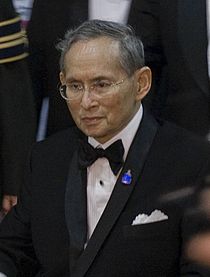 King Rama IX of Thailand has reigned for 65 years.

Many of the Queen’s contemporaries on the thrones of monarchies worldwide are also older rulers with decades of experience presiding over their kingdoms. The current longest reigning monarch is King Rama IX of Thailand, who is five years the Queen’s junior but succeeded to the Thai throne in 1946. His long reign is famous amongst other long established Heads of State. During his last years before his death in 2005, Prince Rainier III of Monaco was reputedly in the habit of asking his valet each morning, “Has Rama survived the night? Or did I just move up in the ranks?” The King commands immense respect within Thailand as the kingdom’s elder statesman and support for the monarchy may decline when his much less popular only son, Crown Prince Vajiralongkorn succeeds to the throne.

The meeting between Henry VIII and Francois I in 1520 known as the Field of the Cloth of Gold for the lavish temporary residences created for the two Kings and their vast entourages. These two monarchs were young men, eager to show off their wealth and power to one another.

There are numerous other world monarchs who continue to reign in their 70s, 80s and 90s. The birth year for King Abdullah of Saudi Arabia has been estimated to be as early as 1916. Sultan Abdul Halim of Kedah, the Malaysian Head of State was born in 1927. Emperor Akihito of Japan was born in 1933 and King Juan Carlos of Spain and Queen Beatrix of the Netherlands are only a few years his junior, having been born in 1938. This worldwide experience of monarchy as an institution presided over by older monarchs differs from previous eras such as the 1520s, when King Henry VIII of England, King Francois of France, Emperor Charles V of the Holy Roman Emperor and Sultan Suleiman the Magnificent of the Ottoman Empire were all young men, eager to test the strength of their armies and treasuries. When a new generation succeeds to the world’s thrones, they will face the popular expectation that they too will bring longstanding experience and wisdom to the position.

Queen Elizabeth II continues to be an active constitutional monarch in her 87th year. If she still reigns on September 10, 2015, she will surpass Queen Victoria to become the longest reigning monarch in the British Isles.