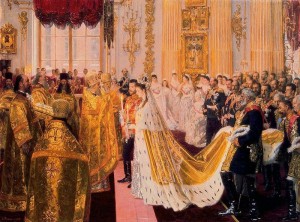 Danish painter Laurits Tuxen's depiction of the wedding of Emperor Nicholas II and Princess Alix of Hesse-Darmstadt in 1894, two weeks after the death of Alexander III. Guests shown include the groom's grandfather, King Christian IX of Denmark, the bride's uncle, the future King Edward VII of England, and the groom's Aunt, Queen Olga of Greece.

The full sweep of Imperial Russian history is comparatively neglected in historical fiction. There are few contemporary novels set at the court of Ivan the Terrible or Peter the Great and Catherine the Great’s rise to power has only recently been the context for a bestselling novel, Eva Stachniak’s The Winter Palace. The exception to this trend is the court of Nicholas II (r. 1894-1917), the last Emperor of Russia, which has inspired countless fictional narratives.

The last years of Imperial Russia have all the elements of a page turning novel: the clash between a three hundred year old autocracy and popular demands for a representative government, a close knit Imperial family facing the adversity of abdication, imprisonment and murder, and the backdrop of the First World War and the larger extended family of Europe’s royal houses. The legend that one of the Imperial children might have survived the massacre in 1918, which was finally disproved by the discovery of the last two sets of remains in 2007 has also inspired countless novelists to create alternate histories for the last Imperial family of Russia.

For novels that illuminate the role of the Romanovs in the First World War, the classics of Russian historical fiction are the best place to begin. August 1914and the subsequent novels of Alexander Solznhenitsyn’s Red Wheel Cycle show the broad sweep of popular opinion toward the Romanovs in the last years of Nicholas II’s reign. In this series, Nicholas II’s popularity is initially boosted by the burst of patriotism that accompanies the outbreak of war before the weaknesses of the chain of command and military infrastructure undermine his rule.

The role of the Romanov women in the war effort is also expressed through the experiences of Solzhenitsyn’s characters. A wounded soldier expresses relief when he sees the Grand Duchess Victoria Feodorovna motorized ambulance division approaching, for it was the only collection of motorized ambulances that operated on the Eastern front in 1914. In Boris Pasternak’s Doctor Zhivago, the story is also influenced by the war work of the Romanov women as Lara travels to the front to search for her husband as part of the Tatiana hospital train. Different translators dispute whether Pasternak referred to the patronage of Nicholas II’s daughter Tatiana or her second cousin, Princess Tatiana Konstantinovna but the close involvement of the Emperor’s family in the war effort is indisputable in this classic novel.

While the classic novels focus on the broad sweep of Russian history during the reign of Nicholas II, life within his palaces has inspired more recent historical fiction. There have been numerous books written from the perspective of Nicholas II’s daughters, Olga, Tatiana, Maria and Anastasia, and the best is The Lost Crown by Sarah Miller. Although this novel is marketed toward a young adult audience, it provides a compelling portrayal of the last years of the Imperial family for readers of all ages. Through her extensive research, Miller avoids both the hagiographic interpretation of the Romanovs’ imprisonment provided in the memoir literature of those who knew them and the overly critical accounts that have been published by recent historians, providing a balanced account of their relationships and decisions. The four distinct personalities of Nicholas II’s daughters come alive in Miller’s work, revealing how they may have responded to the adversity that they faced in 1917 and 1918.

Another skilled historical novelist of Imperial Russia is Robert Alexander, whose three novels, The Kitchen Boy: A Novel of the Last Tsar, Rasputin’s Daughter, The Romanov Bride are original portrayals of Nicholas II’s reign and imprisonment through voices that have received little attention in historical fiction, the kitchen boy Leonid Sednev, Rasputin’s elder daughter Maria, and Empress Alexandra’s sister, Grand Duchess Elizabeth. Like Miller, Alexander incorporates Russian language and culture into the text, evoking the culture of late Imperial Russia and the Emperor’s court. Although the plot twist at the conclusion of The Kitchen Boy has been proved impossible by recent discoveries and scholarship, this knowledge does not detract from the masterful writing and skilled characterization within the novel.

The court of Emperor Nicholas II is a popular setting for historical novelists seeking to capture the drama and tragedy of the last years of Imperial Russia. Alexander Solznhenitsyn, Boris Pasternak, Sarah Miller and Robert Alexander portray different aspects of this complex and compelling period in history.

Next weekend: Royalty in Canadian Literature