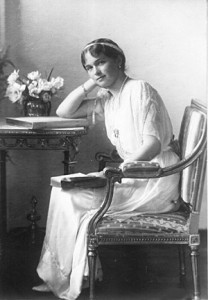 I am pleased to announce the publication of my first peer reviewed scholarly article, “The Succession Prospects of Grand Duchess Olga Nikolaevna (1895-1918)” in Canadian Slavonic Papers, Volume 54, Number 1-2, (March-June, 2012). The article is available from Canadian Slavonic Papers directly and through many university and college library systems.

I presented an early version of this paper at the 2007 Graduate History Symposium at the University of Toronto and have greatly enjoyed researching the political significance of this fascinating historical figure. The development of the article for publication involved extensive research concerning perceptions of the Romanovs in the foreign press, sources that have received less attention from previous scholars. I also took Russian language classes, allowing me to engage with the original text of the Fundamental Laws that governed the Imperial Russian succession during the reign of Russia’s last Emperor, Nicholas II.

ABSTRACT: Current political histories of late imperial Russia seldom discuss Grand
Duchess Olga Nikolaevna (1895–1918), the eldest daughter of Emperor Nicholas II (r.
1894–1917), because she is considered to be politically insignificant. Nicholas’s
discussions with his ministers in the early 1900s regarding the possibility of Olga’s
succession in the absence of a direct male heir, the inclusion of the young Grand Duchess
in the amended regency act of 1912, and the degree of importance attributed to her choice
of husband reveal that the Emperor conceived a political role for his eldest daughter and
considered her, at various times, to be a possible successor to the Russian throne.
Nicholas II’s attempts to unilaterally influence the line of succession after 1905 provide
evidence of his unwillingness to work with the Duma regarding the governance of the
imperial family. In an environment in which Nicholas II’s actual intentions regarding the
succession were open to conjecture, the foreign press constructed a popular narrative
concerning Olga’s political significance as a possible successor to her father, creating the
conditions for the intense international interest regarding the fate of Nicholas and
Alexandra’s children that would be expressed after the murder of the imperial family in
1918.