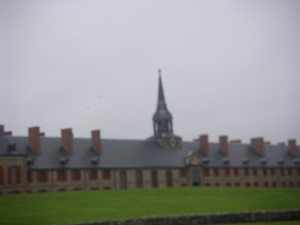 The negative reception Queen Elizabeth II received during her 1964 visit to Quebec City, at the height of the Quiet Revolution, contributed to the popular perception that the current Canadian crown emerged from English Canadian history alone.

The fascinating history of 17th and 18th century New France, including Canada (southern Quebec), Acadia (New Brunswick and Nova Scotia), Ile Royale (Cape Breton Island) and Isle St-Jean (Prince Edward Island) demonstrate the strong influence of the French monarchy over the development of modern day Canada. Following the final acquisition of France’s Canadian colonies by the British, after the treaty of Paris in 1763, the British monarchy assumed control of institutions and settlements already established by French Kings.

Reconstructed residences and vegetable gardens at Fort Louisbourg. The National Historic site presents Louisbourg at its zenith in the 1740s.

While the early settlement of Halifax reflected King George II’s interest in developing a defensive site to counter French attempts to regain Acadia, the establishment of Louisbourg, was an attempt by King Louis XIV to safeguard the French cod fishing industry after ceding Plancentia (in modern day Newfoundland) to the British after the Treaty of Utrecht, in 1713. In the document formalizing the “prise de possession,” [taking possession] the signatories wrote, “after having visited all the ports in the said island of Cape Breton . . .we believe we could not make a better choice.” (ed. Carol Corbin, Aspects of Louisbourg, p. 4). The name of the new settlement honoured King Louis and the island was renamed Ile Royale to reflect the authority of the French crown over the region.

The reconstructed Frederic gate in Louisbourg, reflecting the practice of naming the settlement's streets and landmarks to honour the French crown and the officials who served the King. The name honours a French minister of the marine during Louis XV's reign.

Since Louisbourg was not originally planned as a defensive site, the initial settlement developed haphazardly along the coast as fishermen and merchants claimed land for docks, warehouses and fish flakes. This unregulated development ended in 1717 when the Conseil de la Marine, under the authority of Philippe, Duc d’Orleans, regent for the young Louis XV, decided to develop Louisbourg as a fortress defending the mouth of St. Lawrence river. Louisbourg also became the capital of Ile Royale.

Under the Regency of the Duc d’Orleans, the town was reorganized between the coast and an imposing fortress with all landmarks and streets receiving names that reflected royal authority over the settlement. The fortress itself contained the “Bastion du Roi” and “Bastion de la reine” while the surrounding town was reorganized to fit a grid pattern intersected by straight roads such as the “Rue Royalle,” “Rue Dauphine,” “Rue d’Orleans” and “Rue Toulouse.” (ed. Colin Coates, Majesty in Canada: Essays on the Role of Royalty, p. 198). 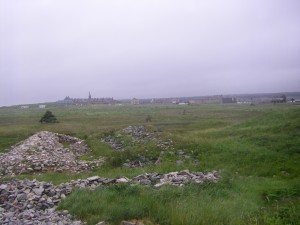 The ruins of the original Fort Louisbourg with the reconstructed sections of the fort in the background.

The inhabitants of Louisbourg displayed their loyalty to the crown and gratitude for the King’s patronage by lavishly celebrating royal occasions. When news of the birth of Louis XV’s grandson, Louis-Joseph, Duke of Bourgogne, reached Louisbourg in 1752, the town staged celebrations that exceeded the King’s expectations.

Although the announcement of the royal birth only contained instructions that a Te Deum service of thanksgiving should be held in the Fortress chapel, the Governor of Louisbourg held a lavish public party with a ball and banquet for invited guests and free wine, artillery salutes, and fireworks displays for the entertainment of the whole town. King Louis XV’s portrait was prominently displayed throughout the celebrations, symbolically linking Louisbourg to its monarch. 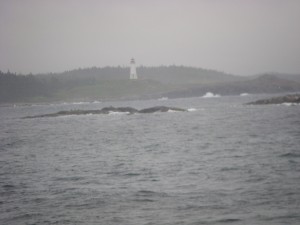 View from the ruins of Fort Louisbourg

The original fortress and surrounding town were captured by the British in 1758 then destroyed in 1760 out of concern that the region would be returned to France during peace negotiations, as it had been following the treaty of Aix-la-Chapelle in 1748. Approximately one quarter of the original settlement was reconstructed beginning in 1961. Louisbourg is now a living history site with a full staff of costumed interpreters performing the roles of the garrison and townspeople.There’s even a restored inn, serving the filling three course meals enjoyed by the officers and wealthy townspeople of 1740s Louisbourg.

The reconstructed fort is faithful to the French royal influence over the settlement. The Governor’s quarters are decorated with portraits of Louis XIV and Louis XV, and the rebuilt houses within the town are decorated with fleur de lys. Staff portraying the soldiers of the garrison shout “Vive le Roi” as they fire the cannons from the battlements. The modern fortress and hiking trail around the ruins of the original Louisbourg are worth including on any Maritime Canadian travel itinerary as they provide a fascinating window into the French monarchy’s role in Canadian history.

Next Week: Queen Victoria’s Influence over the Charlottetown Conference of 1864

2 thoughts on “The Royal History of Canada’s Maritime Provinces Round 2: Honouring the King at Fort Louisbourg”