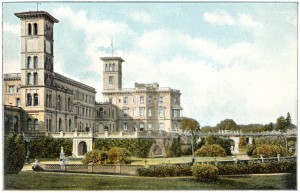 Osborne House on the Isle of Wight in 1910, after the former royal residence had been converted into a Naval College.

With the 2012 Summer Olympics beginning opening today in London, the Diamond Jubilee celebrations ended yesterday in the United Kingdom with visits by Queen Elizabeth II and the Duke of Edinburgh to the New Forest and Isle of Wight.

The Queen and Duke of Edinburgh arrived in Cowes, the site of the world’s oldest Regatta, and former holiday destination of nineteenth and twentieth century royalty, through a “Parade of Sail,” and were greeted by a 21 gun salute fired by the Royal Yacht Squadron. The royal party walked along the seafront, unveiling a plaque commemorating their visit and opening a new lifeboat station. After returning to Hampshire, the royal party toured the New Forest Agricultural Showground.

The Isle of Wight and the New Forest are an appropriate place to end the Diamond Jubilee celebrations in the United Kingdom as both regions have a rich royal history. Osborne House on the Isle of Wight was a favourite residence of Queen Victoria while the New Forest was the setting of pivotal events in the history of the Plantagenet dynasty. 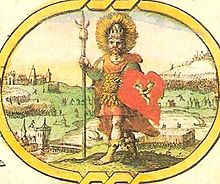 Seventeenth century image of Cerdic, the earliest Saxon King and the first named ancestor of the current Queen.

According to the Anglo-Saxon chronicle, Queen Elizabeth II’s earliest recorded ancestor, Cerdic, invaded and conquered the Isle of Wight in 530, leaving it to his nephews, whose descendants ruled the island until its absorption into the Kingdom of Wessex in 685. The last Saxon King of England, Harold II and his brother Tostig had estates on the island and used their lands there to supply their rebellion against King Edward the Confessor and eventual showdown against each other at the Battle of Stamford Bridge.

The Norman Conquest of 1066 brought immense changes to both the New Forest and the Island, which is described as “Wit” in the Domesday Book. William the Conqueror enclosed the New Forest as a royal park for deer hunting, reputedly evicting the Saxon families who resided in the region. Edward Rutherfurd’s novel, The Forest, contains a dramatic scene of a Norman deer hunt with beaters driving the animals toward the noble hunting party. 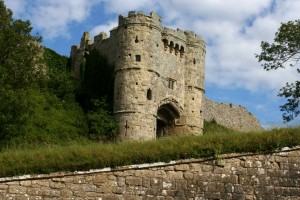 Carisbrooke Castle on the Isle of Wight

The deaths of two of William I’s sons, Prince Richard and William II, in hunting accidents in the New Forest were interpreted during the eleventh century as divine judgement against the enclosure of these lands and removal of the original residents. In contrast, the Isle of Wight was awarded to the Norman FitzOsburn family, who commissioned the original Carisbrooke castle. The Island did not return to the crown’s control until 1293, when Edward I purchased the land as part of his attempted consolidation of authority over the British Isles.

The comparatively remote locations of the New Forest and the Isle of Wight made these regions attractive to royalty or nobility seeking sanctuary during the Wars of the Roses and English Civil Wars. Beaulieu Abbey in the New Forest sheltered a diverse range of important personages including Richard III’s future wife Anne Neville and her mother, the Countess of Warwick, Henry VI’s consort Margaret of Anjou and Perkin Warbeck, who claimed to be one of the lost Princes in the Tower. The Abbey was dissolved during the reign of Henry VIII.

In 1647, King Charles I escaped from parliamentary custody at Hampton Court, intending to flee to the Isle of Jersey. The King and his companions reputedly became lost in the New Forest and missed their intended ship, ultimately fleeing to the Isle of Wight. The Island’s Governor, Robert Hammond, supported the parliamentary cause and held the King prisoner in Carisbrooke Castle.

Queen Victoria, Prince Albert and their nine children on the terrace at Osborne House, Isle of Wight.

The Isle of Wight had much happier associations for Queen Victoria who envisioned the Island as a place where her family could holiday by the seaside. Prince Albert designed Osborne House in the style of a Renaissance Italian villa and oversaw its construction between 1845 and 1851. Queen Victoria was the first British monarch to go on holidays with her children and there was immense public interest in the comparatively informal lives of the royal family on the Isle of Wight. Thousands of prints and photographs of the royal family were sold to the public, prompting Queen Victoria to remark, “No Sovereign was ever more loved than I am (I am bold enough to say).” The cheerful atmosphere at Osborne changed when Prince Albert died in 1861 and Queen Victoria preserved his rooms as they were during his life.

Queen Victoria’s children had very different memories of their holidays on the Isle of Wight. Her eldest son dismissed Osborne House as “a mausoleum” and “surplus to our requirements,” ultimately selling the building to the Naval College. In contrast, his sisters Princess Louise and Princess Beatrice retained property on the Isle of Wight. Beatrice was Governor of the Island from 1896 to her death in 1944 and resided at Carisbrooke Castle. According to her biographer, Matthew Dennison in The Last Princess: The Devoted Life of Queen Victoria’s Youngest Daughter, “The position provided her with a fixed purpose and an enduring interest when, after the Queen’s death, she found herself increasingly marginalized from the centre of royal affairs (209).” Beatrice considered the Isle of Wight her home and gained the admiration and respect of its residents.

Queen Elizabeth II’s Diamond Jubilee tour of the United Kingdom ended in regions that have been associated with the monarchy for more than a thousand years. The New Forest provided hunting grounds for the Norman Kings and a place of sanctuary during the Wars of the Roses. The Isle of Wight has been a Saxon Stronghold, a Norman estate, Charles I’s place of imprisonment and Queen Victoria’s seaside retreat. The Jubilee tour is the latest event in the colourful royal history of the New Forest and Isle of Wight.