Governor General David Johnston at the University of Waterloo in 2010

The Earl and Countess of Wessex’s 2012 working visit to Canada will begin in Ottawa on September 11, where the royal couple will be guests of Their Excellencies the Right Honourable David Johnston, Governor General of Canada, and Mrs. Sharon Johnston at Rideau Hall. That evening, the royal couple will attend a Reception on the Occasion of the Third Biennial Gathering of the Royal Victorian Order Association of Canada. The royal Victorian order was established by Queen Victoria in 1896, awarding extraordinary, important or personal services performed for the Sovereign or the Royal Family.

On September 12, the Countess will tour the National War Museum with Mrs. Johnston, viewing the War of 1812 centenary and permanent exhibitions, and observe a demonstration at the Royal Canadian Mounted Police musical ride centre while the Earl distributes Duke of Edinburgh awards to high achieving students in the Ottawa area. The Earl has assumed the patronage of this Awards scheme, which was originally founded by Prince Philip, Duke of Edinburgh in the 1950s and travels extensively worldwide to present the awards. 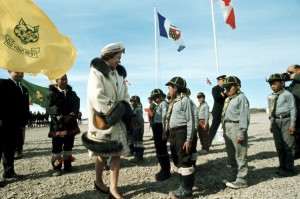 The Queen meeting members of a local cub troop in the Northwest Territories in 1970. Photo credit: Doug Griffin/Toronto Star

After departing Ottawa, the royal couple will fly north to Iqaluit, the capital of Nunavut territory for their first visit to the Canadian arctic. According to the Nunatsiaq News Online, “[The Earl of Wessex’s] visit to Iqaluit is likely related to the recent consecration of St. Judes Cathedral. In 1970, the Queen visited Iqaluit for a sod-turning ceremony that marked the start of construction on the original St. Judes.” Queen Elizabeth II’s 1970 tour of the Canadian arctic helped reinforce Canadian sovereignty over this region and the repeated presence of members of the royal family in the north continues this role as the Northwest Passage becomes increasingly open to seafaring traffic.

The royal couple will return to Ontario after Nunvut, visiting Trenton, Toronto, Hamilton, St. Catharines and North Simcoe as part of a tour organized in consultation with the Honourable David Onley, Lieutenant Governor of Ontario. The visit to Trenton will undoubtedly involve engagement with members of the Canadian forces. The Earl is Colonel-in-Chief of the Hastings and Prince Edward Regiment, based in nearby Belleville and has visited the region on a number of past personal visits. In Toronto, the Earl will continue to distribute Duke of Edinburgh Awards. The Countess’s Toronto engagements have not yet been announced but may include visits to her various charitable patronages in the city, including Toronto General Hospital.

On September 15, the Earl will be part of the 150th anniversary celebrations of The Royal Hamilton Light Infantry. He will also be the reviewing officer for a military Trooping of the Colour ceremony on the tarmac at the Canadian Warplane Heritage Museum. The same day, the Countess will present new colours to the Lincoln and Welland Regiment in St. Catharines as their Colonel in Chief.  The ceremony will take place near the monument to Issac Brock at Queenston Heights, further commemorating the centenary of the War of 1812. The Countess will also visit Niagara College, touring the College’s Wine Visitor and Education Centre and celebrating the launch of the Canadian Food and Wine Institute Research Centre.

In North Simcoe, the Earl and Countess will visit Sainte-Marie among the Hurons in Midland and St. James-on-the-Lines Church in Penetanguishene. Both are historic sites. Sainte-Marie among the Hurons was the first European community in Ontario, serving as the headquarters for French Jesuit Mission to the Huron Wendat people from 1639 to 1649. St. James-on-the-Lines Church celebrated its 175th anniversary last year.