The Earl and Countess of Wessex in Ottawa on September 12 Photo Credit: Andre Forget/QMI AGENCY

The Earl and Countess of Wessex began their 2012 Toronto engagements this evening with a visit to the Toronto International Film Festival. The Countess of Wessex attended a Diamond Jubilee medal presentation and TIFF reception at the Lieutenant Governor’s
Suite in Queen’s Park, the legislative building for the province of Ontario at 6pm. Canadian Filmmaker Atom Egoyan, and Festival Directors Piers Handling and Michèle Maheux each received the medal for their contributions to Canadian arts and culture. At 9pm, the Countess will attend a screening of Rebelle, by Canadian director Kim Nguyen at the Elgin & Winter Garden Theatre.

Rebelle is a drama about Komona, a twelve year old girl forced to become a child soldier in the Democratic People’s Republic of the Congo and her attempts to overcome her tragic circumstances. Lead actress Rachel Mwanza received a Best Actress Prize at the Berlin Film Festival and the most non- professional cast has been praised by critics for their authentic performances. The Earl and Countess of Wessex both have a strong interest in the welfare of children worldwide. In 1999, they founded the Wessex youth trust, which provides funding for organizations that help children in need. The choice of film reflects the couple’s interest in improving the lives of young people. 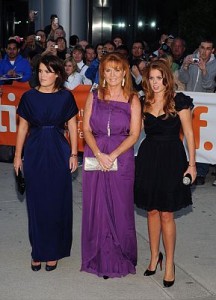 The Duchess of York, Princess Beatrice and Princess Eugenie at the premiere of The Young Victoria in 2009. Photo Credit: Brent Perniac/AdMedia/KEYSTONE Press

The Toronto International Film Festival has seen royalty on the red carpet on previous occasions. In 2009, Sarah, Duchess of York and her daughters Princess Beatrice and Princess Eugenie attended the premiere of The Young Victoria at Royal Thompson Hall. The Duchess of York co-produced the film with Martin Scorsese and Princess Beatrice had a prominent cameo as one of Queen Victoria’s ladies-in-waiting. During their visit to Toronto, the Princesses took the opportunity to shop and see the sights incognito, visiting the Yorkville Club Monaco and the Royal Ontario Museum.

The Earl of Wessex has a longstanding interest in film and the theatre. Instead of pursuing a military career like his elder brothers Prince Charles and Prince Andrew, Prince Edward pursued jobs in the arts. In 1988, he joined Andrew Lloyd Webber’s Really Useful Group as a production assistant.

Edward’s work inspired a personal visit to Toronto in 1989, when the Prince attended the premiere of the Phantom of the Opera. After working for another theatre company, Theatre Division, Edward founded his own television production company, Ardent Productions, in 1993. Ardent produced a broad range of programs, most notably documentaries about King Edward VIII and the restoration of Windsor Castle after the 1992 fire, but experienced financial difficulties. Both the Earl and Countess began a full schedule of royal duties with the Golden Jubilee in 2002 but the couple’s artistic interests continue to influence the itineraries of their official, working and personal visits.

The Earl and Countess of Wessex will attend further engagements in Toronto on Monday, September 17. They will accompany Lieutenant Governor of Ontario, David Onley to a 2015 Pan/ParaPan American Games briefing in the morning. The Earl has a strong interest in youth athletics through his patronage of the Duke of Edinburgh Award program and this briefing is an opportunity for the royal couple to engage with planning of the 2015 Games in Toronto.

In the afternoon, the Earl will preside over a Duke of Edinburgh Community Showcase & Gold Award Ceremony while the Countess visits with Roots of Empathy, a charity that focuses on reducing bullying in the classroom. The Earl and Countess of Wessex’s visit to the Toronto International Film Festival is the start of a busy program of events in Toronto that reflect the royal couple’s artistic interests and charitable patronages.