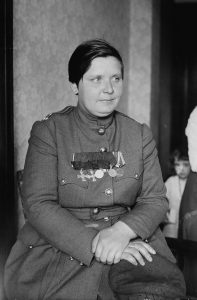 Maria Bockareva, who issued a call to arms for Russian women in May 1917

The May article in my Russian Revolution series in Smithsonian Magazine examines the May Day celebrations in Russia on May 1, 1917 and the subsequent call to arms for Russian women to take up combat roles during the First World War. Advocates of women’s rights in Russia and around the world, including the British suffragist Emmeline Pankhurst, paid close attention to the mobilization of women on the eastern front.

Links to all of my Russian history articles in Smithsonian Magazine are available here.

The May Day celebrations in Saint Petersburg on May 1, 1917 are described in detail in Caught in the Revolution: Petrograd, Russia, 1917 – A World on the Edge by Helen Rappaport. The book also discusses Emmeline Pankhurst’s visit to Russia in the Spring on 1917.

Excerpts from the former Czar Nicholas II’s diaries, including his account of the May Day celebrations outside the Alexander Palace, where the Imperial family were under house arrest in 1917, are available to read in A Lifelong Passion: Nicholas and Alexandra: Their Own Story.

Maria Bockareva, the soldier who formed The Women’s Battalion of Death in 1917, wrote a memoir about her experiences, which was reprinted in 2013 as Maria’s War: A Soldier’s Autobiography.

The newspaper account of Russian women disguising themselves as men to enlist in the war effort as early as 1914 is available to read in Conflict and Cooperation: Documents on Modern Global History, edited by Tracey J. Kinney.

Midwives of the Revolution: Female Bolsheviks and Women Workers in 1917 by Jane McDermid and Anna Hillyar provides further context for the mobilization of women in 1917 as well as the role of women in the Bolshevik party.