As of last week, British bookmakers slashed the odds to 2-1 that the Duke and Duchess of Cambridge’s first child, expected this July, will be a daughter and that her name will be Alexandra. The addition of Alexandra to the list of most likely names for a Princess, which includes Elizabeth, Diana and Victoria, has prompted speculation of an information leak from the royal household. If the Duke and Duchess of Cambridge’s child is indeed a girl, Alexandra would be an entirely appropriate name for a Princess and future queen. The name has a long royal history and is currently a popular baby name among Europe’s royal, princely and grand ducal houses. I discuss how royal baby names are chosen in more detail in an interview with the Associated Press published in numerous newspapers today.

In medieval Scotland, Alexander (or Alasdair as it is translated in modern Scots Gaelic) was a popular name for Kings. King Alexander I of Scotland (r. 1107-1124), nicknamed “The Fierce,” was a complex figure famous for both his piety and his ruthlessness. According to chronicler John of Fordun, “Now the king was a lettered and godly man; very humble and amiable towards the clerics and regulars, but terrible beyond measure to the rest of his subjects; a man of large heart, exerting himself in all things beyond his strength.” 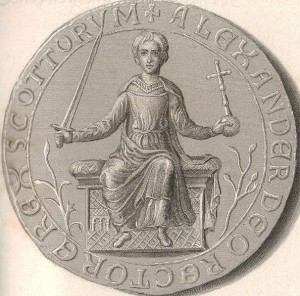 King Alexander II of Scotland (r. 1214-1249) joined the English Barons in their struggle against King John, becoming a party to Magna Carta. According to chronicler Matthew of Paris, “[King John] taunted King Alexander, and because he was red-headed, sent word to him, saying, ‘so shall we hunt the red fox-cub from his lairs.”  Alexander II ultimately achieved a period of peace with England by marrying King Henry III’s sister Joan in 1221. At the time of his death in 1249, Alexander II was attempting to gain control of the Western Isles from Norway.

Alexander II’s only child, Alexander III (r. 1249-1286) was the last King from the Scottish House of Dunkeld. The premature deaths of all three of Alexander III’s children prompted a succession crisis after the King died suddenly in 1286 by accidentally riding his horse over a cliff at night.  King Edward I of England assumed the right to choose the new Scottish dynasty, prompting the Scottish Wars of Independence, which lasted until England acknowledged the authority of King Robert the Bruce in 1327. The choice of Alexandra as a name for the Duke and Duchess of Cambridge’s first born child would honour Scotland’s royal history.

Queen Victoria with her son, Edward VII (who was married to Alexandra of Denmark), her granddaughter, Empress Alexandra of Russia, Emperor Nicholas II of Russia and the infant Grand Duchess Olga Nikolaievna

The first English royal child to receive a feminine variant of Alexander as her first name was the future Queen Victoria. At the Princess’s christening in 1819, the only name her assembled relatives could agree upon was “Alexandrina” because her godfather was Emperor Alexander I of Russia. The baby’s father, Duke of Kent, stated that the child should also receive her mother’s name “Victoria” but that it should not precede the name honouring Alexander I. Victoria spent her infancy as baby “Drina” before assuming her second name for the rest of her life.

Queen Victoria’s eldest son, the future King Edward VII, married the most famous Alexandra in British royal history, Princess Alexandra of Denmark in 1863. The marriage was immensely popular with Queen Victoria’s subjects. The poet Alfred, Lord Tennyson penned A Welcome to Alexandra, which read “Sea King’s daughter from over the sea, Alexandra! Saxon and Norman and Dane are we, But all of us Danes in our welcome of thee, Alexandra!” While the future Edward VII’s reputation varied over the course of his lifetime because of his gambling and mistresses, Alexandra remained consistently popular for her beauty, sense of style, social graces and devotion to her children. 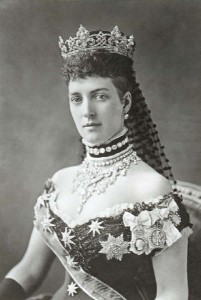 The future Queen Alexandra as Princess of Wales

While none of Queen Victoria’s daughters received Alexandra as a first name, it was a popular name amongst her granddaughters and great-granddaughters. Princess Alix of Hesse-Darmstadt, the daughter of Victoria’s second daughter Alice, assumed the name Alexandra Feodorovna as the consort of Emperor Nicholas II of Russia. As a Russian Empress, Alexandra became a controversial figure because of her perceived distaste for the Russian aristocracy, reliance on Gregory Rasputin as a faith healer for her hemophiliac son Alexei, and political influence during the First World War. Empress Alexandra was murdered by Bolshevik Revolutionaries along with her husband, children and servants in 1918.

Other descendants of Queen Victoria named Alexandra include Princess Alexandra of Saxe-Coburg-Gotha, the third daughter of the Queen’s second son, Alfred, Duke of Edinburgh. She married a minor German Prince, Ernst II, Prince of Hohenlohe-Langenburg, and became a Red Cross nurse during the First World War.

Princess Louise, Duchess of Fife, eldest daughter of Edward VII and Queen Alexandra named her elder daughter Alexandra in honour of her mother. The young Alexandra of Fife was styled a Princess by her grandfather and succeeded her father to become Duchess of Fife in her own right.

Alexandra remains a popular baby name among Europe’s royal, princely and grand ducal houses. In 1991, Grand Duke Henri and Grand Duchess Maria Teresa of Luxembourg named their only daughter Alexandra. In 1999, Prince Ernst August V Hanover and Princess Caroline of Monaco also named their daughter Alexandra. If the current rumours are correct and the Duke and Duchess of Cambridge have a daughter in July and choose the name Alexandra, they will be following a long royal tradition that dates from the medieval Kings of Scotland to the modern princesses of Luxembourg and Hanover.

One thought on “Princess Alexandra of Cambridge? The History of a Potential Royal Baby Name”