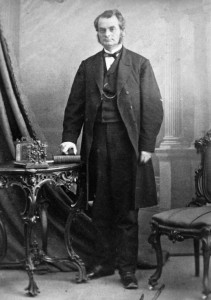 I have revised and expanded the Canadian Encyclopedia article on Sir Samuel Leonard Tilley, the most influential of the Fathers of Confederation from New Brunswick.

Tilley was a strong supporter of both Confederation and the construction of the Intercolonial Railway. He is believed to have suggested the name “Dominion of Canada” for the new country. He was a member of Sir John A. Macdonald’s first government before he was appointed lieutenant-governor of New Brunswick. In contrast to a number of the other Fathers of Confederation, he favoured Prohibition.