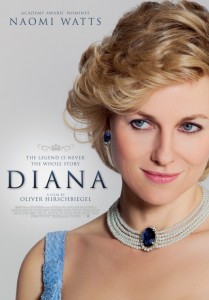 The 2013 film Diana begins the evening that Diana, Princess of Wales died in a Paris car accident. Diana, played by Naomi Watt,s is walking around her hotel suite alone. Over the course of the film, which covers incidents from the last two years of the Princess’s life, she is often shown on her own. She goes jogging on the Kensington Palace grounds, drives around London in her butler’s car, rehearses her BBC interview in front of the mirror and makes a few attempts at cooking/reheating dinner in the palace kitchen.

There’s a element of truth to this approach. In his book, On Royalty, journalist Jeremy Paxman described being invited to lunch at Kensington Palace by Diana the year before her death. Paxman concluded, “She just wanted someone to talk to, and, unlike other lonely people, was in the happy position of being able  to invite anyone she liked and being reasonably confident that they would turn up.” In the film, a lonely Diana invites London heart surgeon, Dr. Hasnat Khan, played by Naveen Andrews, over to the palace  and a two year affair ensues.

The problem with the screenwriter’s decision to focus on Diana’s lonely life behind closed doors is that the film provides little sense of why she became an iconic figure who enthralled the public worldwide. Throughout the film, Diana attracts admiring crowds and is pursued by paparazzi but there is little sense of why she “the most famous woman in the world” as Khan frequently observes onscreen. The Princess attends a single charitable event in the first half of the film and her gift for connecting with people of all backgrounds receives little attention until the months immediately before her death. By that time in the film, her activism on behalf of land mine victims and compassion for bereaved mothers appears to be a response to her love and admiration for Dr. Khan rather than her innate empathy for the less fortunate.

The affair with Khan so dominates the film that there is little sense of the person Diana was before they met. Although there are allusions to her parents’ divorce, her love for her sons and her own failed marriage, she seems curiously incomplete before beginning of the affair. Despite the actual Diana’s years of charity work on behalf of AIDS victims, the fictional Diana has difficulty finding her way around a hospital and goes “snooping” to learn more about how she help patients in need. She tells Khan that her royal duties have resulted in her knowing a little bit about every subject but there is little evidence of this knowledge in her actions. Diana’s bodyguards and the paparazzi come and go in the film. Neither are onscreen when her relationship with Khan breaks down and the film portrays Diana shouting “Ha-a-a-sna-a-t” in front of his apartment in the middle of the night.

Apart from a brief last meeting with William and Harry before going on vacation with Dodi Al Fayed, members of the royal family do not appear onscreen and are rarely mentioned. Unfortunately, the script perpetuates the historical Diana’s own view that “the palace” was conspiring against her. The fictional Diana complains that the royal family is keeping her from her sons, only allowing her to see them every fifth week. While laws dating from the reign of King George I dictated that the Queen had custody of her grandchildren, William and Harry actually spent equal time with each parent after the marriage ended. It was not the royal family but the boarding school education of the two princes that limited Diana’s time with her sons.

The makers of Diana missed an opportunity to explore why millions believed that they had suffered a personal loss when the Princess of Wales died in 1997. The film is so focused on her affair with Khan that all other aspects of her life including her charity work, motherhood and relationship with the royal family do not receive the attention they deserve. The stilted script with lines like, “I am a heart surgeon, you are the most famous woman in the world” provide few clues about how Diana really behaved behind closed doors. With talented actors such as Watts and Andrews, Diana should have been a much stronger film.