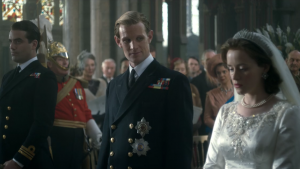 Claire Foy and Matt Smith as the Queen and Prince Philip in the Netflix series, The Crown

I have been enjoying watching The Crown series on Netflix, which dramatizes the early years of Queen Elizabeth II’s reign. I have been posting comments about the major themes and historical events in each episode on twitter @royalhistorian .

I also discussed the first four episodes of The Crown with Rachel Thompson for her article on Mashable.com, How accurate is Netflix’s ‘The Crown’? My interview covered portrayals of King George VI’s temperment, Prince Philip’s adjustment to life as the Queen’s consort and the Duke of Windsor’s place in the royal family.

Click here to read the interview with Rachel Thompson at Mashable.com