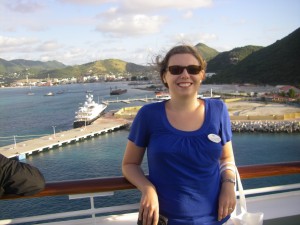 Sailing into St. Maarten in December 2012

On August 5, I fly to Copenhagen, Denmark. After a few days touring Danish castles, I board a cruise ship bound for the United Kingdom, Ireland, France, Spain and Portugal where I will be a royal history guest lecturer for the month of August. This will be my third cruise ship lecture series. In 2012, I sailed from Barcelona to Miami with stops in the Canary Islands and St. Maarten/St. Martin. During the summer of 2013, I lectured on a Baltic Sea cruise, visiting Amsterdam, Stockholm, Copenhagen, Helsinki, Tallinn and Saint Petersburg.

The usual blog features, including royal book reviews and royal history articles will be on hiatus until I return to Canada on September 4. Instead, there will be pictures and posts from my travels.  There are plenty of royal stops planned for my itinerary including Hamlet’s Castle Kronborg in Helsingør, Denmark, the Royal Yacht Britannia in Scotland, Caernarfon Castle in Wales, Cornet Castle in Guernsey, the Castle of the Dukes of Brittany in Nantes, Louis XIV’s house in St. Jean de Luz and the Castle of São Jorge in Lisbon.

For more about my past experiences as a cruise ship lecturer, see my article “Down to the Sea with a History PhD” on page 6 of the Summer 2013 Queen’s University Alumni Review Magazine