This morning, I successfully defended my PhD in history at Queen’s University and became Dr. Carolyn Harris. 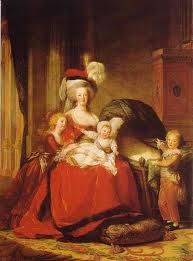 Portrait of Marie Antoinette and her children by Elisabeth Vigée-Lebrun, 1787.

My dissertation, Henrietta Maria and Marie Antoinette: Queenship and Revolution in Early Modern Europe, is a comparative study of the conflict between how Queen Henrietta Maria, consort of King Charles I of England and Scotland and Queen Marie-Antoinette, consort of King Louis XVI of France perceived their roles as wives, mothers and heads of royal households and the expectations of their husbands’ subjects during the English Civil Wars and French Revolution respectively. I analyze how the impeachment of Henrietta Maria by the House of Commons, in 1643, and the Trial of Marie Antoinette before the Revolutionary Tribunal, in 1793, were the public culmination of longstanding ideological differences between the monarchy and broader society concerning a foreign Queen’s place within her marital family. The delegitimization of the Queen as a wife, mother and head of a royal household served as a means for new regimes to discredit monarchical government and strengthen their claims to legitimate rule.