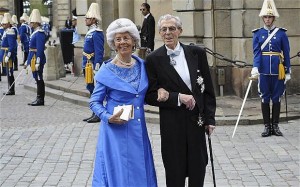 Count Carl Johan Bernadotte and his second wife Gunilla Wachtmeister at the wedding of Crown Princess Victoria of Sweden and Daniel Westling in 2010.

Count Carl Johan Bernadotte, Uncle of King Carl XVI Gustaf of Sweden and the last survivor of the eighty-five great-grandchildren of Queen Victoria, was part of a generation of European royalty that experienced unprecedented changes in the relationship between monarchy and society. Carl Johan was born in 1916, fifteen years after the death of Queen Victoria and the in the midst of the First World War, which precipitated the collapse of the German, Austrian and Russian monarchies. Although Carl Johan never knew his famous great-grandmother, he had numerous elder cousins with memories of the Queen. At the time of Queen Victoria’s death in 1901, she had thirty-seven surviving great-grandchildren and many of them were present for celebrations of her Golden and Diamond Jubilees in 1887 and 1897. 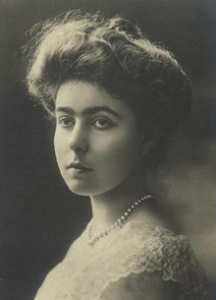 Carl Johan’s grandparents, Queen Victoria’s third son Prince Arthur, Duke of Connaught and his wife Princess Margaret of Prussia led a long life of public service. Prince Arthur served as an officer in the Rifle Brigade in Canada in 1869, Egypt in 1882 and India from 1886 to 1890, and his children became some of the most well traveled members of the 19th century British royal family. His eldest daughter Margaret met Crown Prince Gustav Adolf of Sweden on a tour of Portugal, Spain, Egypt and Sudan in 1905 and they were married later that year. During the First World War, Crown Princess Margaret of Sweden founded a sewing circle to support the Red Cross and acted as an intermediary between relatives on opposite sides of the conflict. Her father, Prince Arthur was Governor General of Canada during the War and he corresponded with his elder daughter and grandchildren in Sweden.

Crown Princess Margaret of Sweden died suddenly of an infection in 1920, leaving five young children. With the exception of her eldest son Prince Gustaf Adolf, the father of the current King of Sweden, who died in a place crash in 1947, they all had long lives and were among the senior surviving descendants of Queen Victoria into the 21st century. While Carl Johan’s parents and grandparents were all members of European royal houses and his only sister Ingrid married Frederick IX of Denmark, the Prince and two of his brothers, Sivgard and Bertil married commoners.

Charlotte, reigning Grand Duchess of Luxembourg from 1919 to 1964

In contrast to Great Britain, which gradually relaxed the lineage requirements for royal spouses after the First World War, Swedish royalty were expected to marry other royalty until the 1970s. Carl Johan defied both his family and Swedish popular opinion to marry journalist Kerstin Wijkmark in 1946, losing his royal title and his place in the Swedish line of succession. He received the courtesy title of Count of Wisborg from Grand Duchess Charlotte of Luxembourg in 1951.

While the beginning of Carl Johan’s career was marked by the military service that had defined the life of his grandfather, the Duke of Connaught, he pursued opportunities that were unusual for royalty after his marriage. Carl Johan and Kirstin lived for five years in New York, where he worked as the representative of the Anglo-Nordic Trading Co, a Scandinavian firm. The couple also became close friends with film actress Greta Garbo and traveled with her in the French Riviera. Although Carl Johan’s exclusion from the Swedish line of succession was upheld by the 1980 revisions to the laws governing the royal family, he was invited to state events, most recently the wedding of Crown Princess Victoria to Daniel Westling.

Count Carl Johan Bernadotte died on May 5, 2012 at the age of ninety five. He is survived by his second wife Gunilla Wachtmeister and children Christian and Monica.