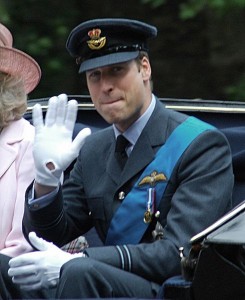 Prince William, Duke of Cambridge will turn thirty on June 21, 2012. Today, it was announced that he has qualified as a Captain for Search and Rescue missions in the Royal Air Force, demonstrating his abilities as a pilot and commander.  For members of the royal family, turning 30 is often a time for major life transitions and the Duke of Cambridge is considering his future at this time. During a recent interview with Katie Couric to mark his grandmother, Queen Elizabeth II’s Diamond Jubilee, William discussed both his desire to start a family and the impending decision he will make about his career. In the interview, his enthusiasm for children is unambiguous. William told Couric, “I’m just very keen to have a family and both Catherine and I, you know, are looking forward to having a family in the future.”

In contrast, the Prince faces a difficult decision regarding whether to take another tour of duty as a search and rescue pilot or assume full time royal duties. “I’m still trying to decide,” he said to Couric. “It’s a really difficult one because I really enjoy my time in the Air Force. And I’d love to continue it. But the pressures of my other life are building. And fighting them off or balancing the two of them has proven quite difficult.” The comparatively anonymous life that the Duke and Duchess of Cambridge currently enjoy in Anglesey, Wales might be more suited to raising children but the recent ill health of William’s grandfather, Prince Philip, Duke of Edinburgh, demonstrates the need for younger members of the royal family to assume increasing numbers of royal engagements. 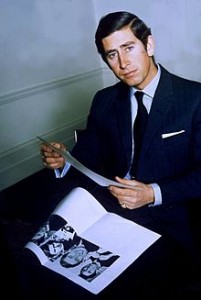 Prince Charles at Buckingham Palace in 1974, photographed by Allan Warren

In 1975, the twenty-seven year old Prince Charles also participated in revealing interview with Women’s Own Magazine where he discussed his expectations about life at thirty. The interview is most famous for Charles’s remark that “thirty is a good age to get married,” which fuelled public pressure for him to propose to Lady Diana Spencer a few years later, but the Prince’s remarks are also signficant for their insights into his worldview at the age of twenty-seven.

When Prince Charles declared thirty to be the best age to marry, he was acknowledging that he was not yet ready for a wedding and that he took the institution of marriage seriously. The Prince told the magazine, “By this time you have seen a great deal of life, met a large number of girls, been able to see what types of girls there are, fallen in love every now and then, and you what it’s all about . . .I would never recommend getting married too young. I think it can be very awkward, and you miss so much, you get tied down.”

Camilla Parker Bowles, Prince Charles’s former mistress at the time, and eventual second wife would have undoubtedly agreed that life experience was a necessary prerequisite to marriage. In contrast, Lady Diana does not appear to have had serious relationships prior to her marriage, and married Charles at the young age of twenty. In hindsight, the conflicts that would occur during Charles’s and Diana’s marriage are foreshadowed by this interview.

Prince Charles also discussed personal and popular attitudes toward divorce during the 1975 interview, demonstrating his views on this subject before the breakdown of his marriage to Diana and renewed relationship with Camilla changed his perspective. Charles made clear to Women’s Own Magazine that it was very important for him to marry the right person because he would not consider divorce under any circumstances.

When the interviewer asked if he would consider marrying a divorced woman, he referred to the unfortunate precedent set by King Edward VIII’s abdication then marriage to the twice divorced Wallis Simpson, stating, “Things have changed a great deal since 1936 but even today I think people would not be altogether happy if I married a divorced woman.” That conclusion proved true in 2005 when Charles’s second marriage prompted mixed responses from the public.

Prince Charles and Prince William faced different circumstances as they approached their thirtieth birthdays. As second in line to the throne, William has enjoyed the opportunity to pursue a career as a search and rescue pilot in relative seclusion in Anglesey, Wales. The public is interested in any plans the Duke and Duchess of Cambridge might have to start a family.

In contrast, Charles had been heir to the throne since the age of three and was under intense pressure to get married from the general public as he approached thirty. The 1975 interview engaged with this interest in his future, providing the Prince with the opportunity to add his own views on marriage to the public speculation. Charles spoke with certainty about his views on marriage then changed his perspective in subsequent decades while William acknowledges that he is still trying to balance his work as a Search and Rescue pilot and a member of the royal family, and will have significant decisions to make in the future.

2 thoughts on “Comparing Prince William and Prince Charles at 30”