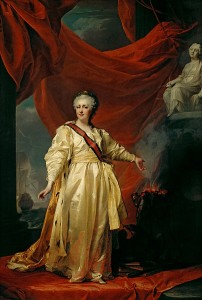 Portrait of Catherine the Great as a Legislator in the Temple Devoted to the Goddess of Justice by Dmitri Levitsky, early 1780s.

My article in Smithsonian Magazine, “When Catherine the Great Invaded The Crimea And Put The Rest of the World On Edge” looks at the original annexation of the Crimea by the Russian Empire during the reign of Empress Catherine II in the late eighteenth century. Catherine presented herself to the world as an “enlightened” despot who ruled according to the law, and considered the welfare of her subjects.  Her foreign policy and treatment of internal dissent, however, demonstrated that she saw did not observe any constraints on her power. For centuries the Crimean peninsula and other regions of the modern day Ukraine have been one of Europe’s battlegrounds. Today, Russian President Vladimir Putin is following in a long tradition of Russian leaders expanding their political influence at the expense of Ukrainian autonomy.

Click here to read “When Catherine the Great Invaded The Crimea And Put The Rest of the World On Edge” in Smithsonian Magazine.

Interested in learning more about Catherine the Great and The History of the Ukraine?

Books about Catherine the Great

Robert K. Massie, Catherine the Great: Portrait of a Woman

Books about the Ukraine

Anna Reid, Borderland: A Journey Through the History of Ukraine