Throughout Wicked Women of Tudor England: Queens, Aristocrats, Commoners, historian Retha Warnicke reminds her readers that there is much that is still unknown about the biographies of the most notorious women of Tudor England. This scholarly yet highly readable work discusses the lives of six figures who were judged by contemporaries and/or subsequent historians to be “wicked.” Most famously, there was King Henry VIII’s second wife, Anne Boleyn whose enemies were reputedly able to engineer her downfall because of her alleged flirtations with male courtiers.

Anne’s cousin, Henry VIII’s fifth wife, Catherine Howard is usually described as a promiscuous young woman who foolishly cuckolded the aging King. In Edward VI’s reign, the Protector’s wife Anne Somerset gained a reputation for haughtiness and overweening ambition. Lettice Knollys, Elizabeth I’s cousin and the wife of her favourite Robert Dudley was seemingly pregnant at the time of her wedding following a longstanding affair. Finally, Thomas More was supposedly unhappily married twice because his first wife Jane Colt was plain faced and contrary, and his second wife Alice Middleton was a shrew.

Warnicke convincingly argues that these stories tell us more about the Tudor court climate of gossip and innuendo than they do about the actual lives of the most prominent women of sixteenth century England. Her approach of viewing the lives of individual women through the broader attitudes toward gender, marriage and the family in Tudor times  has received a great deal of recent popular attention as historical novelist Phillipa Gregory cites Warnicke’s research as an inspiration for her Tudor themed novels including The Other Boleyn Girl. 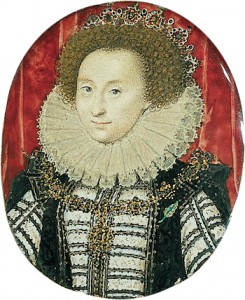 Portrait miniature by Nicholas Hilliard of Lettice Knollys, Countess of Leicester (1543-1634), one of the most notorious women of Elizabeth I's reign.

Each miniature biography in Wicked Women of Tudor England is preceded by a detailed analysis of existing historiography, which discusses the reliability of the sources analyzed by modern scholars. These sections reveal that such seemingly simple biographical details as Anne Boleyn’s birth date, and whether she was the elder or younger sister are still in dispute. Warnicke’s analysis also reveals that modern conceptions of women and the family encourage anachronistic conclusions about sixteenth century court ladies.

For example, a description of the loose fitting dress Lettice Knollys wore to her wedding to Robert Dudley has been cited as evidence that she was pregnant at that time because her gown seemed similar to modern maternity wear. Women in the Tudor period, however, did not wear special loose fitting gowns when they were pregnant but instead added extra panels to their existing dresses.

Warnicke’s analysis of the negative interpretations of Thomas More’s marriages is similar to Germaine Greer’s recent work, Shakespeare’s Wife in that it questions the assumption that extraordinary men are often unhappy in their marriages, regardless of the actual evidence regarding their personal lives. Just as Greer discussed Hathaway’s full significance to William Shakespeare’s life and work, Warnicke highlights evidence of More’s warm relations with both wives. Jane Colt’s contemporaries did not leave any accounts stating that she challenged her husband’s attempts to expand her education, and Alice Middleton’s affectionate marriage does not match the rumours that she was a scold or a shrew.

The most moving chapter of Warnicke’s work is her reevaluation of the life of Queen Catherine Howard. Catherine was executed for adultery and has been judged for her alleged promiscuity by many of her biographers. Even David Starkey, who criticized works that pass moral judgement on Catherine described her as “a good time girl” in Six Wives: The Queens of Henry VIII. Warnicke argues that Catherine’s youth at the time of her encounters with her music teacher, Henry Manox, and courtiers Francis Dereham and Thomas Culpepper, and the references to coercion her testimony about her relations with these men suggest that she may have been the victim of predatory behaviour.

is an ideal book for readers of history or Tudor historical fiction looking to separate reliable evidence from innuendo in the biographies of these six notorious sixteenth century women. Warnicke provides convincing evidence that none of the women she discusses were actually wicked but found their reputations under scrutiny because they married politically controversial husbands.