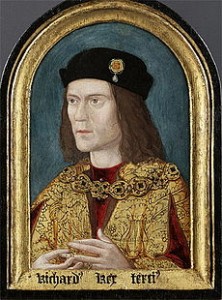 “The remains of King Richard III continue to yield new information about one of England’s most controversial kings and his family. DNA analysis reveals that Richard’s bones share mitochondrial DNA, which is passed through the female line with the Canadian Ibsen family, but there is no genetic match with his male line relatives. The release of these findings has prompted speculation about the Queen’s right to reign if there was a break in the main royal bloodline. The royal succession, however, was not always determined by seniority in the royal family….”

Click here to read the full column in the Ottawa Citizen: “The Queen’s Reign Doesn’t Depend on Richard III’s DNA”

Curious to learn more about the life and legacy of King Richard III? My University of Toronto School of Continuing Studies course “Richard III: Monstrous or Misunderstood?” begins January 7, 2015. Click here to register!