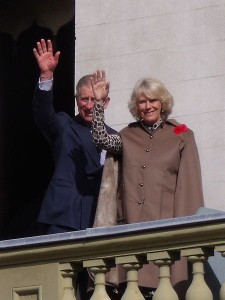 The Prince of Wales and the Duchess of Cornwall on the balcony of Dundurn Castle, Hamilton during their 2009 tour of Canada.

The itinerary for Diamond Jubilee tour of Canada by Charles, Prince of Wales and Camilla, Duchess of Cornwall, was released this morning by the Honourable James Moore, Minister of Canadian Heritage and Official Languages. The royal couple will visit the provinces of Ontario, New Brunswick and Saskatchewan during their time in Canada, from May 20 to May 23.

Moore stated in the official press release, “We are delighted that their Royal Highnesses will join Canadians in celebrating the 60th anniversary of Her Majesty’s reign as Queen of Canada . . .We welcome the Royal Couple and look forward to showing them some of the best of what Canada has to offer.” The theme of the 2012 royal tour is  “For Queen and Country: Service to Canada – A Royal and National Value.”

Like the Duke and Duchess of Cambridge’s visit in July, 2011, the Prince of Wales and Duchess of Cornwall are touring Canada around a holiday weekend, which should increase the number of Canadians able to see them during their tour.The decision to host the royal visit over the Victoria Day weekend is particularly appropriate in 2012 since Queen Victoria is the only previous British monarch to celebrate a Diamond Jubilee. 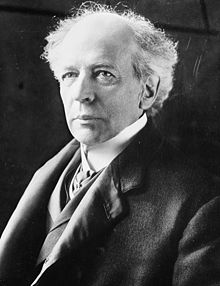 During the celebrations in honour of Queen Victoria’s sixty years on June 22, 1897, a large Canadian delegation traveled to London to participate in the parade. The Canadian Cavalry led “the Colonial Procession” followed by Prime Minister Sir Wilfrid Laurier, who had received a knighthood that morning at Buckingham Palace. The Canadian contribution to the parade also included a detachment of the Toronto Grenadiers and Royal Canadian Highlanders. In contrast, Queen Elizabeth II’s 2012 Jubilee is being celebrated by royal visits to all the commonwealth realms by senior members of the royal family, reflecting the comparative ease of travel in the twenty-first century and the transformation of the British Empire into a Commonwealth of equal nations.

Prince Charles and the Duchess of Cornwall will visit the Canadian Forces Base (CFB) in Gagetown, Oromocto, New Brunswick and Saint John, New Brunswick on May 21, attending a meeting with young veterans and their mentors involved in the Military Entrepreneurship summer school at CFB Gagetown, and Victoria Day celebrations in Saint John. The royal couple will then travel to Toronto for Victoria Day fireworks, a meeting with the National Leadership of Assembly of First Nations, and a special military event to commemorate the 200th anniversary of the War of 1812 on May 22.

While in Toronto, the Duchess of Cornwall will pay her first visit the Queen’s Own Rifles as their new Colonel-in-Chief. The tour will conclude in Regina, Saskatchewan, where the Prince of Wales and Duchess of Cornwall will celebrate the centennial of the legislative building. Prince Charles is a patron of the Regina Symphony Orchestra, and the couple will attend a performance before they return to the United Kingdom.

The Gagetown CFB, Saint John, Toronto and Regina were not included in the Duke and Duchess of Cambridge’s 2011 tour of Canada so the Jubilee Tour will bring the royal couple to an audience that has not recently experienced a royal tour. The Prince of Wales and Duchess of Cornwall are visiting with groups that traditionally enjoy a close relationship with the Crown, such as the Canadian Forces and the First Nations of Canada, and taking the opportunity to renew their personal relationships with Canadian organizations such as the Queen’s Own Rifles and the Regina Symphony Orchestra.