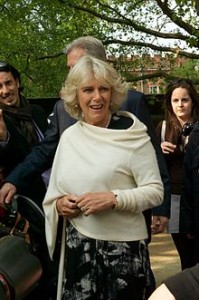 The Duchess of Cornwall in April, 2011

During the Jubilee Tour of Canada by the Prince of Wales and the Duchess of Cornwall, which concludes today in Regina, Saskatchewan, the Duchess gave her first speech outside the United Kingdom. The Duchess’s mastery of public engagements and integration into the royal family has attracted widespread attention in Canada and I have had the opportunity to discuss her impact on the royal visit with Canada AM, cbc.ca and other Canadian media outlets over the past few days.

In a solo royal engagement at Moss Park Armoury in Toronto yesterday as honourary Colonel-in-Chief of The Queen’s Own Rifles regiment, the Duchess addressed the troops in both of Canada’s official languages, English and French. Her three minute speech acknowledged her regiment’s accomplishments including its participation in the 1944 Juno Beach landing. 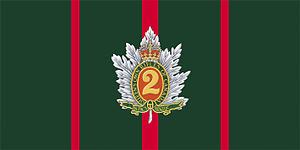 The Camp Flag of the Queen’s Own Rifles

The Duchess has been looking forward to meeting her regiment for the last two years. She stated in her speech, “Since my appointment in 2010, I have looked forward enormously to this moment when I can personally experience the professionalism and proud history of this great regiment. It has been a huge pleasure for me to meet so many serving soldiers, their families, and many veterans here today. It is quite clear that your desire to serve Canada and uphold the standards of The Queen’s Own Rifles is second to none.” She mentioned the example of her predecessors in this role, Queen Mary and Princess Alexandra, and her own Canadian ancestry as the descendant of Allan MacNabb, Premier of the Province of Canada from 1854 to 1856. The address was well received and the Duchess effortlessly circulated amongst the guests at the reception that followed.

This first overseas speech for the Duchess of Cornwall closely follows a previous speaking engagement at the London Press Club Awards earlier this May. While her audience expected her to express support for strict privacy laws because of the negative press coverage she experienced in the past, the Duchess instead affirmed that freedom of the press is “at the heart of our democratic system.” The London Telegraph argued that the speech to the Press Club would silence her critics and attract popular admiration.

The Duchess of Cornwall’s speeches in London and Toronto demonstrate a remarkable transformation of her role and reputation since her marriage to the Prince of Wales in 2005. The popular attitude toward her relationship toward the Prince was largely negative at the time of her wedding. The Duchess’s reputation reflected both the widespread public admiration for the late Princess Diana, and the longstanding historical reality that royal mistresses who aspire to be royal wives are criticized by their contemporaries.

When Edward III’s son John of Gaunt, Duke of Lancaster married his third wife, and mother of his four youngest children, Katherine Swynford in 1396, the new Duchess of Lancaster had been described as an “unspeakable concubine.” According to Swynford’s biographer Alison Weir in Mistress of the Monarchy, her reputation eventually improved with one chronicler observing, “The lady herself was a woman of such bringing up and honorable demeanor that envy could not but in the end give place to well deserving.”

By Tudor times, criticism of ambitious royal mistresses had become an accepted means of voicing political opposition to the King’s policies as Andy Wood discusses in his article, The Queen is “a goggyll eyed hoore”: gender and seditious speech in early modern England in The English Revolution c. 1590-1720. The tradition of vilifying these unofficial consorts continued into the 20th and 21st centuries with the popular rejection of Wallis Simpson as an acceptable Queen to Edward VIII and the mixed responses to the marriage of the Prince of Wales to Camilla Parker Bowles.

One thought on “The Duchess of Cornwall’s Speech in Canada”