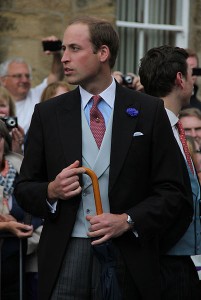 Prince William, the Duke of Cambridge at the wedding of Lady Melissa Percy last year.

This week, Prince William, the Duke of Cambridge, began a ten week course in Agricultural Management at Cambridge University. William’s studies reflect the generational shift currently underway in the royal family. Just as the Prince of Wales is assuming the overseas travel once undertaken by the Queen, including recently attending the Commonwealth Heads of Government Meeting in Sri Lanka and Nelson Mandela’s funeral in South Africa, William is learning more about his future responsibilities. Once Prince Charles becomes King, William will succeed to the Duchy of Cornwall and be responsible for managing this vast landholding. A course in agricultural management is professional training for the Prince’s future role as Duke of Cornwall.

Despite the importance of increased knowledge of agricultural management to William’s future responsibilities, the Prince’s enrollment at Cambridge has triggered a backlash from his fellow students. Will Heilpern of the Cambridge student newspaper, The Tab, wrote,  “Normally students need A*AA at A-level to gain entry to Cambridge University, whilst the Prince only achieved a mediocre ABC. Conveniently though for Will, he is the registered benefactor of the department he will be studying at.” Leaving aside the fact that the Prince of Wales is the actual Patron of the Cambridge Program for Sustainability Leadership, the part of the School of Technology that organized William’s course, the Tab article presents a very narrow definition of the role of universities in twenty-first century education. 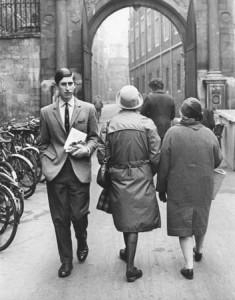 The Prince of Wales as an undergraduate at Trinity College, Cambridge in 1969 (Photo by Fox Photos/Getty Images)

Heilpern’s emphasis on A-levels (the approximate British equivalent of Canadian academic Grade 12 credits) assumes that all university students follow a similar trajectory from secondary school to a degree granting program that concludes their education. If William’s attendance at Cambridge is viewed within that traditional framework, he appears to be part of a tradition of royal gentleman scholars who spent time at Oxford and/or Cambridge regardless of their academic qualifications.

William’s great-great-great grandfather, the future King Edward VII, studied at both Oxford and Cambridge despite his difficulties with academic subjects throughout his childhood and adolescence. The Queen’s father, King George VI, spent a year studying history, economics and civics at Trinity College, Cambridge in 1919 even though he ranked at the bottom of his class in his final examinations at the Royal Naval College at Osborne. An heir to the British and Commonwealth thrones did not complete a university degree at either Oxford or Cambridge until the current Prince of Wales earned a Second class honours, lower division, Bachelor of Arts on June 23, 1970. 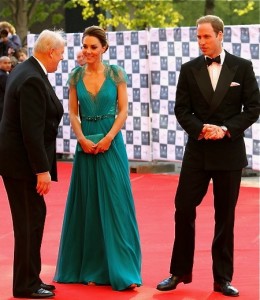 Prince William, however, is not a student who has recently finished secondary school attending university for his first degree. He has already graduated from the University of St. Andrews and the Royal Military Academy Sandhurst. Instead, William is part of a growing trend toward lifelong learning where adult professionals return to university to upgrade their qualifications or simply gain new knowledge and skills. As an instructor at the University of Toronto, School of Continuing Studies and frequent guest lecturer, I have had the pleasure of meeting numerous students who view education as a process that continues far beyond the completion of traditional university degrees. Since William is returning to university after receiving a degree to complete a course that will assist him with his future endeavors, he has more in common with continuing education students around the world than secondary students who have just completed their A-levels.

When Kensington Palace announced that William would spend ten weeks at Cambridge studying Agricultural Management, Diane Bell, who runs the shop and post office in the north Wiltshire village of Nettleton, expressed the view that the Prince could become an advocate for people living in rural areas.  I hope that William’s decision to continue his education long after the completion of his degree will also bring worldwide attention to the benefits of lifelong learning. As the Duke of Cambridge and thousands of others have discovered, there are advantages to returning to the classroom at any age or career stage.

My history course “Women in Power,” begins at the University of Toronto, School of Continuing Studies on March 18, 2014