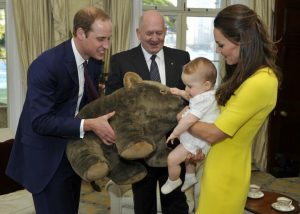 Prince George of Cambridge, with his parents The Duke and Duchess of Cambridge, receives a gift from the Governor-General of Australia at Admiralty House, Sydney in 2014. The 2016 royal tour of Canada will be second overseas tour for Prince George.

I will be giving TV interviews this weekend about the Duke and Duchess of Cambridge’s 2016 tour of British Columbia and the Yukon. In the interviews, I will also be discussing my forthcoming book, Raising Royalty: 1000 Years of Royal Parenting

. The tour will be the second visit to Canada for William and Kate as a married couple and the first Canadian itinerary for their children, Prince George and Princess Charlotte.

Here is the current schedule of interviews:

The schedule is subject to change.