The King’s Pearl: Henry VIII and His Daughter Mary

The childhood of Queen Mary I has long been viewed through the perspective of her adolescence and adulthood. As Melita Thomas, observes, Mary was known for centuries as “Bloody Mary” because of the executions of Protestants during her short reign and has recently been rediscovered as “Tragic Mary” because of the devastating impact of the divorce of her parents, King Henry VIII and his first wife, Catherine of Aragon, on her life. As a result, Mary is viewed as her mother’s daughter and the dynastic marriage negotiations of her childhood are often treated as doomed to failure from the beginning.

In The King’s Pearl: Henry VIII and His Daughter Mary

, Thomas re-evaluates the relationship between Henry VIII and Mary I, emphasizing Mary’s political and personal significance to her father. The dynastic marriage negotiations of Mary’s childhood are taken seriously as Henry attempted to increase his prominence in European politics by securing prestigious marriage for Mary. Henry’s relations with Catherine’s nephew, Holy Roman Emperor Charles V, are particularly well analyzed by Thomas as the prospect of having a grandson who would rule most of Europe seemed to reconcile Henry to the prospect of a female heir.

Thomas makes clear that popular opinion within England and the rest of Europe deemed Mary to be Henry’s heir until the birth of a younger brother, despite the efforts of Henry and Anne Boleyn to assert their daughter’s Elizabeth’s seniority in the succession through the Act of Supremacy. After Anne’s execution, there were doubts concerning whether Henry would have subsequent children with his third wife, Jane Seymour. Mary therefore remained politically significant event after she had been declared illegitimate.

Thomas devotes less attention to the personal bond between Henry and Mary beyond their shared love of music, gardens and courtly display as well as willingness to take risks to achieve their political ambitions but this imbalance reflects the available source material. There is more evidence of Mary’s personal relations with her successive stepmothers from her antipathy toward Anne Boleyn to her warm friendship with Katherine Parr. Mary’s determination to be an active rather than passive participant in Tudor politics is evident throughout the book. The King’s Pearl: Henry VIII and His Daughter Mary

is an interesting and well researched counterpoint to prevailing image of Mary I as a “Bloody” or “Tragic” figure. Like her half-siblings, Elizabeth I and Edward VI, she was a child of Henry VIII and his influence had a lifelong impact on her politics and personality.

So High a Blood: The Story of Margaret Douglas, the Tudor that Time Forgot

One of Queen Mary I’s closest friends was her Scottish cousin Lady Margaret Douglas, daughter of King Henry VIII’s sister Margaret Tudor and her second husband Archibald Douglas, 6th Earl of Angus. Margaret Douglas was a prominent figure at the Tudor court during the reigns of Henry VIII, Edward VI, Mary I and Elizabeth I. Through her grandson, King James VI of Scotland/James I of England, she is an ancestor of Queen Elizabeth II. Despite her importance during the sixteenth century and the dramatic circumstances of her life – she was imprisoned in the Tower of London on more than one occasion – Margaret Douglas is little known today. Her long residence at the Tudor court resulted in her being marginalized in histories of sixteenth century Scotland while her Scottish ancestry meant that she received little attention in histories of England during the same period.

In So High a Blood: The Story of Margaret Douglas, the Tudor that Time Forgot

, Morgan Ring presents Margaret Douglas a strong and adaptable personality, a key figure in the religious and political upheaval of Elizabeth I’s reign and a consummate survivor. Margaret enjoyed the rare ability of reconciling with Henry VIII after incurring his displeasure on more than one occasion because of her romances with members of the Howard family. The exclusion of the Scottish line from Henry VIII’s will, however, suggests that they were in conflict at the time of his death and Ring provides a convincing analysis of these circumstances in her book.

During the reign of Elizabeth I, Margaret, a devout Roman Catholic who had enjoyed a close friendship with Mary I, opposed the Queen’s Protestant religious settlement. Margaret also favoured the marriage of her elder son, Lord Darnley, to Mary, Queen of Scots in opposition to Queen Elizabeth I’s wishes. After Darnley’s death, Margaret blamed Mary, Queen of Scots and enjoyed an improved relationship with Elizabeth that lasted until Margaret’s younger son married without the Queen’s permission. As the mother of two sons who survived to adulthood (a circumstance that was rare among the Tudors) and then as the grandmother of the King of Scotland, Margaret was an important political figure throughout Elizabeth I’s reign. Ring restores a little known member of the Tudor dynasty to her rightful place in sixteenth century history. 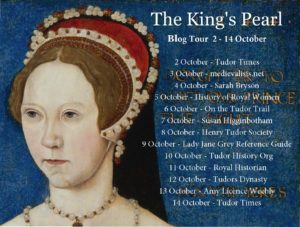