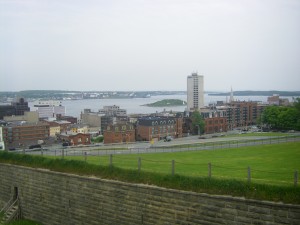 View of Halifax from Fort George on Citadel Hill. The city's early history was shaped by the eighteenth century monarchy.

I spent the past couple weeks traveling around Nova Scotia and Prince Edward Island on my honeymoon. In addition to spectacular scenery and really tasty seafood, these provinces contain fascinating historic sites that demonstrate the longstanding relationship between the crown and the development of modern day Canada. After a long and pleasant train ride from Toronto through Ontario, Quebec, New Brunswick and Nova Scotia, we began the trip in Halifax, capital of Nova Scotia.

In contrast to many other North American settlements, which were organized by emigrants themselves, Halifax was founded by the British government and centrally planned by the crown. The Mikmaq territory originally called Chebucto or “The Biggest Harbour” had been the site of the failed Duc d’Anville expedition, sent by King Louis XV of France in an attempt to recapture Acadia from the British in 1746. To protect his interests in British North America, King George II (r. 1727-1760), sent Lieutenant General Edward Cornwallis to found Halifax with thirteen transport ships filled with settlers and a warship in 1749. 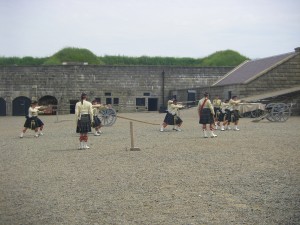 Since the French North American military stronghold at Louisbourg was located nearby on Cape Breton Island, and the new British settlement violated existing treaties with the Mikmaq, the first priority for Cornwallis was the fortifications, which were given suitably regal names. At the top of Citadel Hill, Fort George housed the garrison. A subsequent fort built on Georges Island in the harbour would be named Fort Charlotte after his daughter-in-law.

Although the current fort has been restored to the Victorian period, the site is one of the oldest places of British habitation in Halifax. On September 11, 1749, Cornwallis wrote to the Privy Council of the United Kingdom, “The Square at the top of the Hill is finished. These squares are done with double picquets, each picquet ten foot long and six inches thick. They likewise clear a Space of 30 feet without the Line and throw up the Trees by way of Barricade. When this work is compleated I shall think the Town as secure against Indians as if it was regularly fortify’d.” The letter reassured the King about the security of the new settlement. 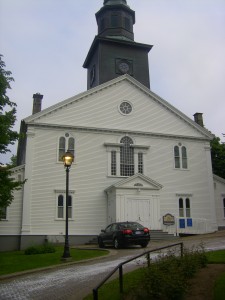 St. Paul's Church, the oldest building in Halifax, founded by proclamation of King George II in 1749.

Although the defense of Halifax was King George’s first priority, the monarch also took a close interest in other aspects of the town’s development. In 1749, St. Paul’s Anglican Church was founded by proclamation of the King. The original timbers were cut in Boston, which was still part of British North America at the time, and shipped to Halifax. St. Paul’s was originally the garrison church of Halifax and became the seat of the Nova Scotia Anglican diocese.

King George II’s grandson and successor, King George III provided the 1802 royal charter for the University of King’s College in Windsor, Nova Scotia, one of the oldest and best universities in Canada. (I completed the first year of my undergraduate degree there, taking the Foundation Programme of great books in Western philosophy, literature and art.). The university’s first students were Anglican loyalists who fled to Nova Scotia after the American Revolution. The university remained in Windsor until its original buildings were destroyed by fire in 1920 then moved to its current location adjacent the Dalhousie University campus in Halifax. 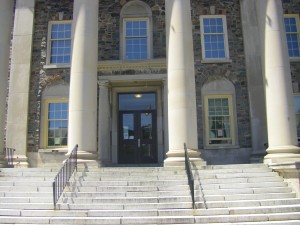 The current main building of the University of King's College, Halifax, which was founded in 1789 and received its royal charter in 1802.

During the late eighteenth and early nineteenth centuries, Halifax hosted the earliest royal visits to Canada, as King George III’s sons became involved in the military life of British North America. The King’s third son William, (the future King William IV) initially formed an unfavourable view of Canada when he arrived in Newfoundland as Captain of the HMS Pegasus in 1786. The Prince wrote to his father, “The face of the country is truly deplorable: the season as far backward as the beginning of April. A small brushwood for the first five hundred yards in shore and then a most dreadful inhospitable and barren country intersected by fresh water ponds, lakes and bogs. Few people have ever visited the inland parts of the island so that they are scarce known; it is not even determined whether they are inhabited.” The Prince was much happier when he visited Halifax, the following year, writing that the growing city was a “A very gay and lively place full of women and those of the most obliging kind.” To King George III’s displeasure, William took his ship on a return trip to Halifax from his subsequent posting in the West Indies without receiving permission to leave his post. 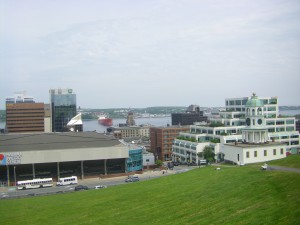 View of the Town Clock from the Citadel, one of the many buildings commissioned by Edward, Duke of Kent during his residence in Halifax.

While Prince William’s visits to Halifax were brief, his younger brother, Edward, Duke of Kent lived there for much of the 1790s, eventually becoming commander-in-chief of the British Forces in North America in 1799. The Duke of Kent took a close interest in the development of the city, founding numerous regency style public buildings including the Town Clock and St. George’s Round Church, and improving the fortifications. The Duke presided over a prosperous decade in Halifax’s history in which the population increased and new businesses were founded.

The Hanover dynasty had a profound impact on the early history of Halifax, Nova Scotia. While George II focused on the town’s potential as a defensive site, George III and his sons contributed to the development of the intellectual, economic and social life of the colony. Eighteenth century Halifax hosted Canada’s first royal visits and its historic sites demonstrate the direct involvement of the Hanover Kings and Princes in the founding and expansion of the city.

Next week: “Vive le Roi” Serving the King of France at Fort Louisbourg.

2 thoughts on “The Royal History of Canada’s Maritime Provinces Round 1: Hanoverian Halifax”