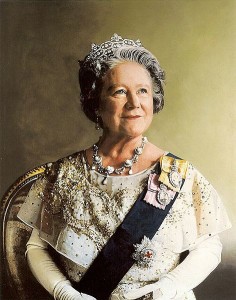 My latest article for the Canadian Encyclopedia is a biography of Queen Elizabeth, the Queen Mother (1900-2002) with a focus on her impact in Canada. King George VI and Queen Elizabeth toured Canada in 1939, the first Canadian visit by a reigning monarch.  During her fifty year widowhood, the Queen Mother visited Canada on numerous occasions and there were rumors that she would be appointed Governor General during the 1950s. During her long lifetime, the Queen Mother became honourary Colonel-in-Chief of Canadian military regiments and a patron of Canadian charities.