The Maid and the Queen: The Secret History of Joan of Arc is a fascinating dual biography of two extraordinary women who shaped the course of the Hundred Years War between England and France. The Maid, Joan of Arc, has passed into legend. Ever since she was exonerated in 1456 of the charges of witchcraft and heresy that led to her execution in 1431, a narrative of her singular divine mission has been accepted by scholars and popular audiences alike.

Statue of Joan of Arc outside the Cathedral at Rheims where Charles VII was crowned.

In most accounts of the Hundred Years War, Joan is described as a peasant girl from the remote town of Domrémy who believed she heard the voices of St. Michael, St. Margaret and St. Catherine calling on her to save France. According to this version of events, she miraculously recognized the Dauphin in a hall crowded with nobles, persuaded him to be crowned at Rheims as Charles VII and inspired the French to defeat the English at Orleans without any assistance from the various powerful noble factions who exerted influence in fifteenth century France.

Goldstone places Joan in the context of her times, demonstrating that her divine mission was part of the earthly design of the Dauphin’s most powerful supporter, his mother-in-law, Queen Yolande of Sicily, Duchess of Provence and Countess of Anjou. Charles VII might never have regained his throne if it had not been for the Queen’s patronage of the Maid. Dohremy was not a remote village but part of the Duchy of Bar, ruled by Yolande’s son René of Anjou, and court politics were as significant to Joan’s success as divine inspiration.

Goldstone effectively challenges the traditional portrayal of Joan of Arc as a lone warrior, providing convincing evidence that she would never have had access to the Dauphin without the assistance of Queen Yolande. The English invasion threatened her daughter Marie`s queenship and her own extensive lands in Provence and the Loire Valley. The indecisive Dauphin was seeking divine guidance for his campaign and Yolande provided it in the form of Joan of Arc. 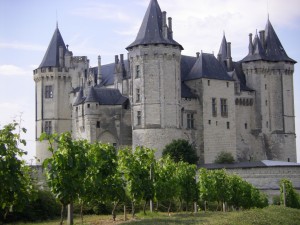 Despite Charles VII’s eventual description of his mother-in-law as “The late Yolande, of good memory, queen of Jerusalem and Sicily, in our youth did us great services in many ways that we hold in perpetual memory,” the Queen has been largely forgotten. As demonstrated by her previous works, Goldstone has a gift for uncovering the historical significance of little known medieval Queens. The Lady Queen

illuminated the reign of Joanna I of Sicily and Jerusalem who ultimately bequeathed her possessions to the Counts of Provence, while Four Queens: The Provencal Sisters Who Ruled Europe revealed the connections between the thirteenth century consorts of England, France, Sicily and the Holy Roman Empire. Although The Maid and the Queen is subtitled “The Secret History of Joan of Arc” its great accomplishment is the restoration of Queen Yolande to her rightful place in French history.

By placing Joan of Arc in context as part of Yolande’s political and diplomatic policy, Goldstone also reveals the full complexity of the conflict between France and England. The military prowess of Henry V at the Battle of Agincourt, immortalized by William Shakespeare, is tempered by a sensitive portrayal of his opponent King Charles VI, who began his reign with great promise before suffering from a debilitating mental illness. A wide range of medieval source material is incorporated into the narrative including the literature beloved by Yolande’s parents and her son René of Anjou and the full transcripts of Joan of Arc’s trial. Goldstone also writes with a dry wit, noting that English history might have taken a difference course if Yolande had married another one of her suitors, the unlucky King Richard II.

The Maid and the Queen: The Secret History of Joan of Arc is an engaging account of how two powerful women changed the course of French history. Nancy Goldstone places Joan of Arc in her rightful context and provides the full scope of Queen Yolande’s power and political influence during the Hundred Years War.

3 thoughts on “The Medieval Book Reviews 1: The Maid and the Queen: The Secret History of Joan of Arc by Nancy Goldstone”